Skip to Content
PolkaJunction / International Travel / Thailand / Ayutthaya Temples and Ruins : 10 Photos to help you plan a trip to this UNESCO Site

A couple of years back when Lucknow was our home for a short period,  we frequented Ayodhya – the Hindu pilgrimage town on the banks of the revered  Sarayu, a river that flows through the central verdant plains of Uttar Pradesh in India.

Ayodhya, one of the ancient cities in India is associated with Lord Rama- the protagonist of the Hindu Epic of Ramayana and one of the avatars (incarnation) of Lord Vishnu. My Ayodhya visit was akin to the divinity experienced in the meandering lanes and ghats of Benares, the oldest inhabited city in the world. I always had a feeling of belonging here though was just a nomad.

This very sense of familiarity pervaded me while I was crossing the majestic river of Chao Phraya and silhouettes of towering ruins caught my attention. Just that, this time, it was not Ayodhya but the ancient city of ruins of Ayutthaya in Thailand, the erstwhile Kingdom of Siam.

Ayutthaya to Ayodhya  – A nostalgic trip down the memory lane

Ayutthaya offers an intriguing and fascinating slice of Siamese history even in its ruins. And one can see why it is listed as a UNESCO Heritage Site. On keen observation, one may not find many tourists from South Asian countries like India , frequenting Ayutthaya because ruins are to be found everywhere in this ancient land of ours, much older than the Ayutthaya ruins, each divulging one part of its history but the trip to Ayodhya and readings on the same, made me appreciate Ayutthaya. And I am sure it will intrigue the history enthusiasts. 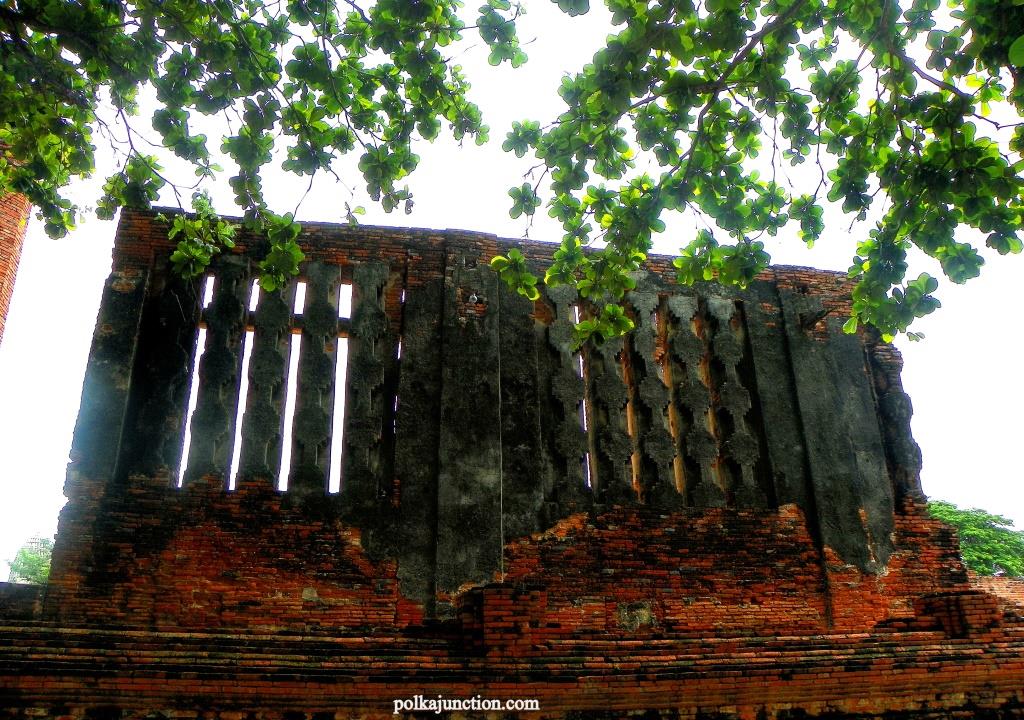 Let me dish out a disclaimer here that not every tourist or traveller is bound to fall in love with these ancient cities- be it Ayutthaya, Ayodhya or Benares. Some may be disappointed, some eclectic owing to its ancient stories and some may find them just a treat for their shutterbugs. However, I am in love with all the three ancient towns owing to its rich heritage and a feeling of belongingness.

I would suggest you go through this photo-essay and decide upon your travel plans. For convenience, I have divided the long article into two parts. This is the first part covering the history and the famous Wat Maha That.  Hope, this series intrigues you to plan a visit to Ayutthaya Temples and Ruins and see Thailand from a different perspective than what is widely branded about this beautiful country.

Khmers occupied this province and established a stronghold here, naming it Ayodhya after the ancient and one of the holiest Hindu cities of India- Ayodhya, the old capital of Awadh. Ironically, the word “Ayodhya” in  Sanskrit means “not to be warred against”. The below structure has strong Khmer influences. 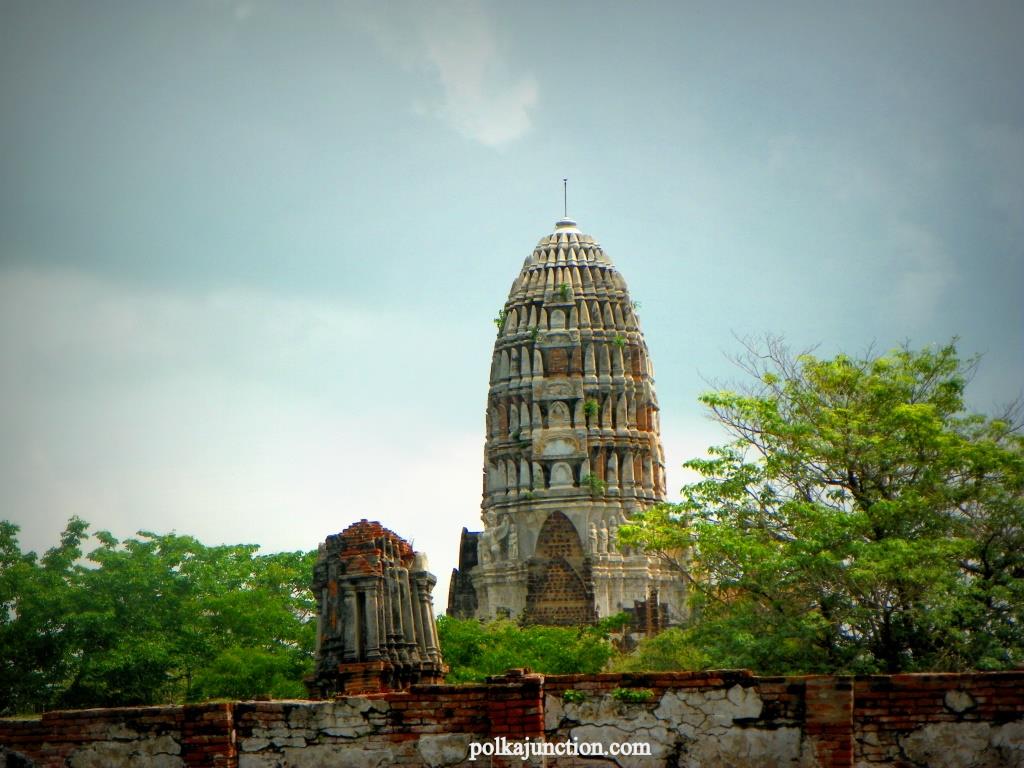 Just an hour away from the Capital city of Bangkok, this UNESCO-listed heritage site, founded in 1350, was the second Siamese capital after Sukhothai. Ayutthaya sits at the confluence of three rivers: Chao Phraya (which flows to Bangkok and onto the sea), Lopburi and Pa Sak. 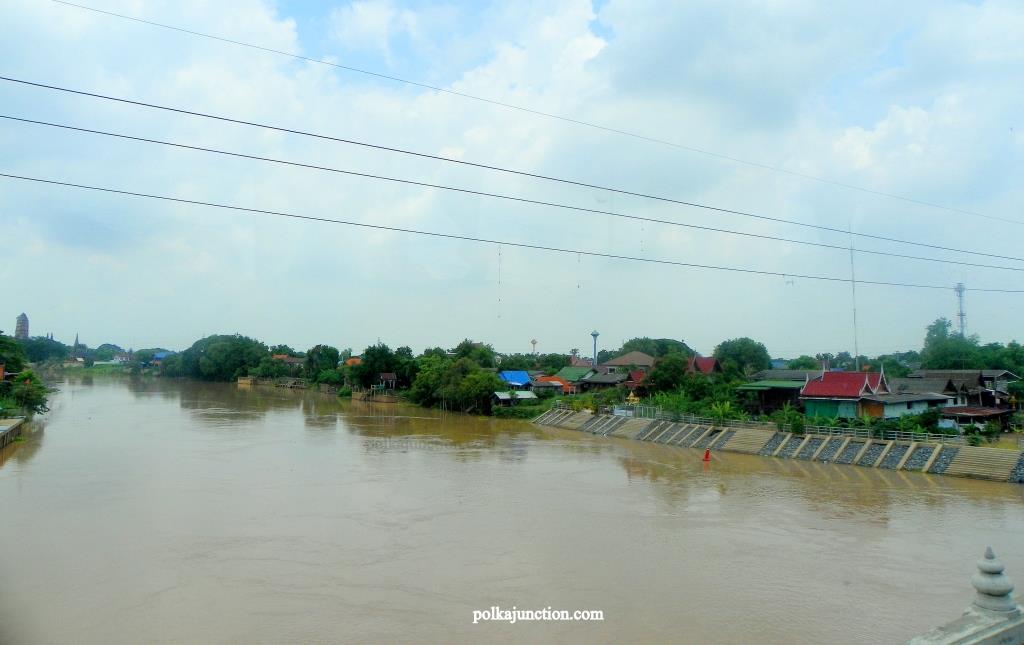 Bustling with commerce brought through the waterways, it was one of the world’s most cosmopolitan cities that welcomed foreigners and diplomats from far-flung nations.

However, the invasion of Ayutthaya by the Burmese in 1767 and the subsequent destruction of this once prosperous city by burning it, made its inhabitants flee down the river and establish a new capital in Bangkok.

Remember: A temple is referred to as a ‘Wat’ in Thai language and a mountain or hill as ‘Doi’

On our day trip from Bangkok, we got to visit three important places in Ayutthaya province. Some, we had to miss owing to restoration work and a few due to the unpredictable weather conditions. It had stopped raining when we alighted from the bus in Ayutthaya and thus the trees looked much greener and the bricks bright red after a nice water-wash by nature! Perfect day for capturing the Ayutthaya Temples and ruins through my camera lens…though the sun was busy playing peek-a-boo!

The very first temple ruins that we visited was of Wat Maha That and this has been discussed in this article.

Wat Maha That (Temple of the Great Relic)

The foundation stone of Wat Maha That was laid by Sri Indraditya, the first King of the Sukhothai empire in the 13th century. It was a small temple at first but was later enlarged and renovated several times by succeeding Kings.

Because structures were added over the course of time spanning many centuries, the temple grounds contain structures of several architectural styles including Lanna, Sukhothai, Singhalese and Mon Hariphunchai. 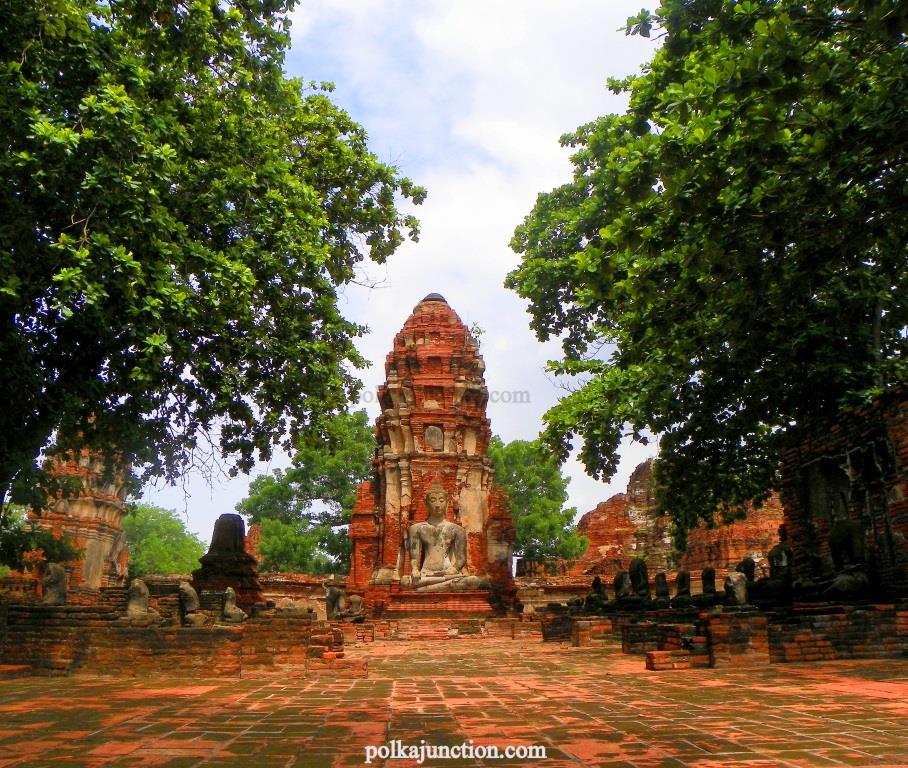 Wat Mahathat was also the residence of the Supreme Patriarch or leader of the Thai Buddhist monks. The temple is believed to be built during the 14th century A.D. (the early Ayutthaya period).

Set at the epicentre of inner Ayutthaya city, the principal prang (which has now collapsed) used to house a miniature casket containing the Buddha’s relics. This casket was buried 17 metres deep in the ground under its base. The casket is now on display at the Chao Sam Phraya Museum. 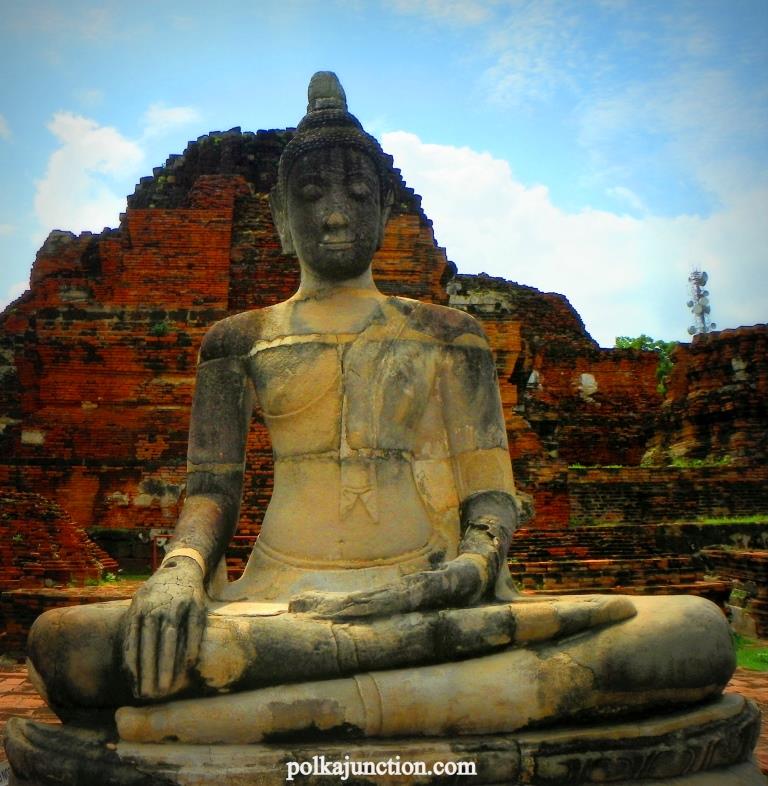 Most of the Buddha statues barring a couple of them were headless! Our guide gave an explanation for the headless Buddhas(Not sure if it true!) that -The Kings who ordered the building of the temples and statues are said to have followed a tradition of embedding precious stones and metals like gold into the statues. So, when the city was destroyed, looters descended upon the statues beheading the Buddhas to get to the precious stones. It is believed that these destroyers also sold the Buddha heads to private collectors and museums in Europe. 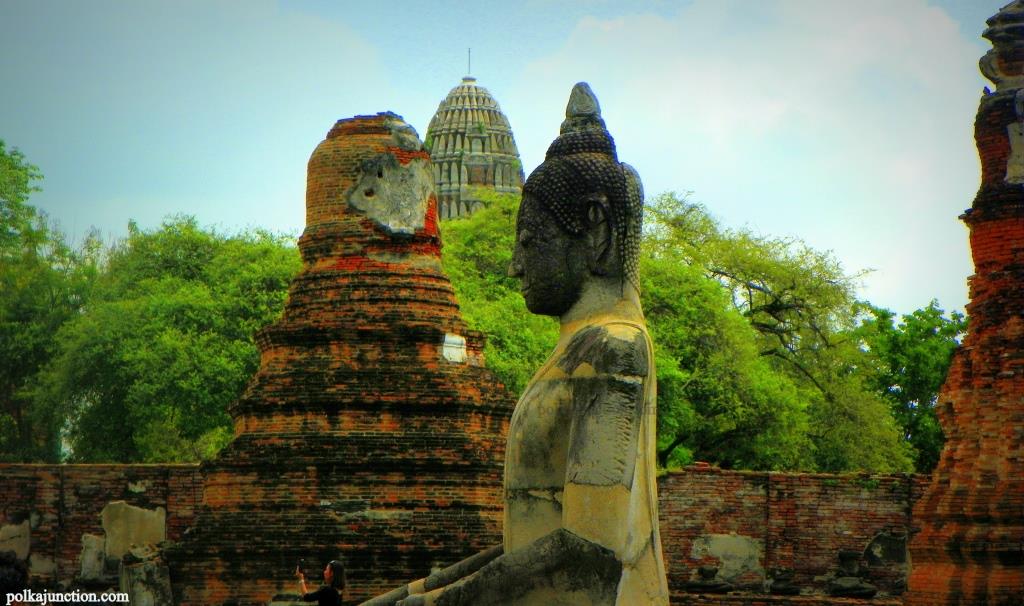 I found it heart-breaking to walk around countless statues that were headless. And, could not get myself to capture more than one picture of the array of idols that still looked eerily calm in that posture! 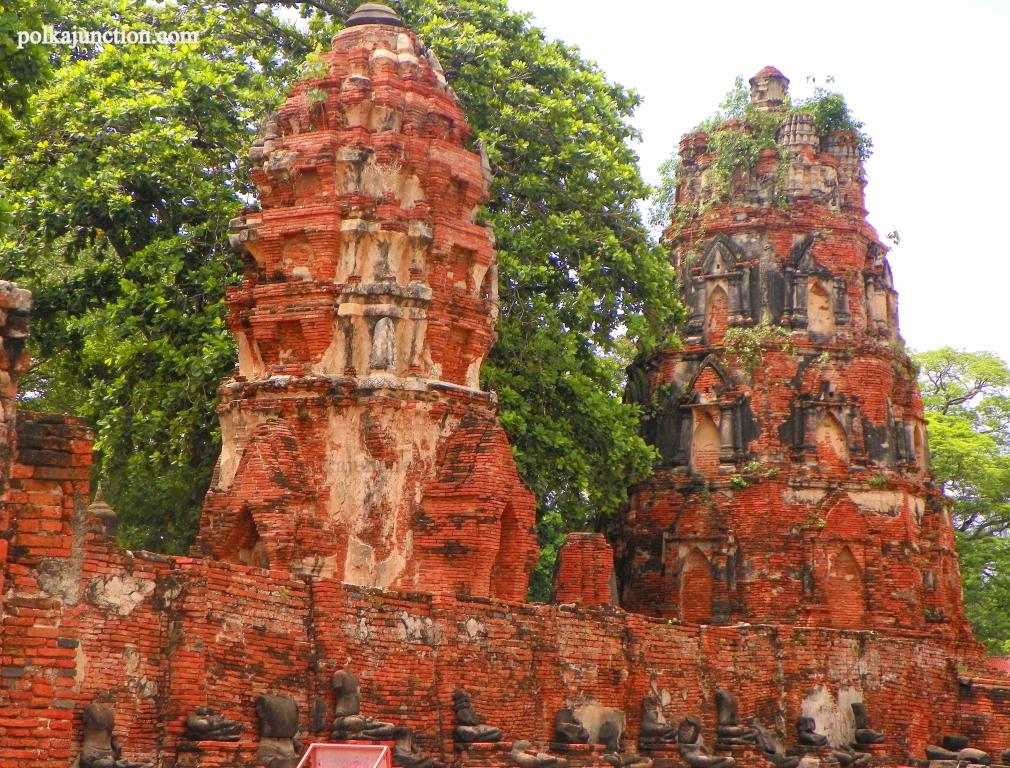 This made me realize that religion is not always a cause of destruction. Unlike the Mughals who plundered and destroyed the Hindu temples in India including that of Ayodhya, here in Ayutthaya, the Buddhist temples were destroyed by Buddhists themselves- the Burmese.

A quest for Power through Greed and Lust and the uncivilized ways of the world are that seek destruction!Once these traits come to the forefront, Religion is sidelined and ‘Violence’ becomes a means to achieve the end. Time to ponder over our actions to achieve Peace!

The guide informed us that in 2005  an excavation into the crypt had revealed gold rings, jewels and relics, most of which are on display at the Chao Sam Phraya National Museum. 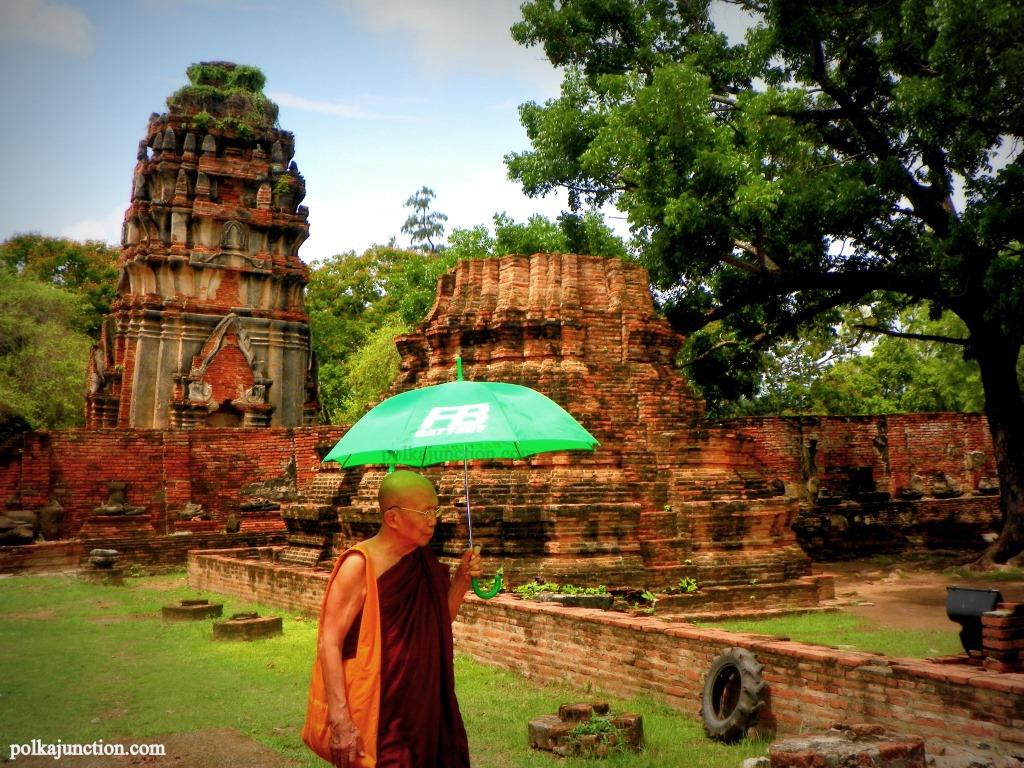 Wat Mahathat is one of Ayutthaya’s most popular sites. Loads of tourists flock to this temple ruins to click selfies with the Buddha Head that has become synonymous with Ayutthaya. 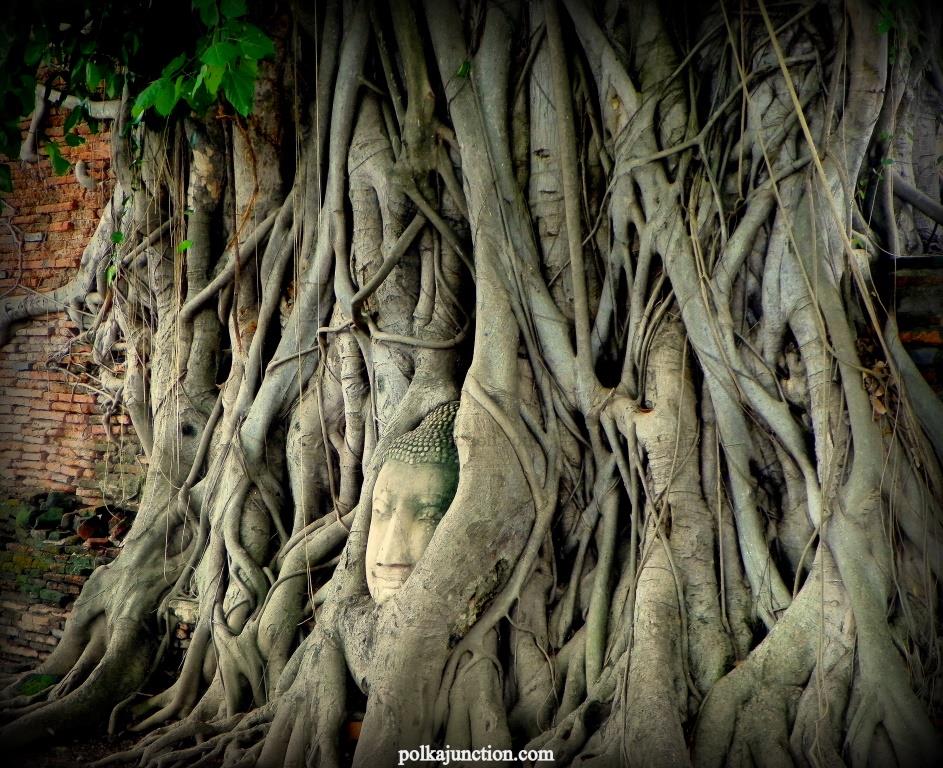 The board near this tree reads :

‘The head was once part of a sandstone Buddha image which fell off the main body onto the ground. It was gradually trapped into the roots of a constantly growing Bodhi tree. The stone head has rather flat and wide facial structure with thick eyebrows and big eye-lids, straight wide lip and discernible lip edge reflecting the art of middle Ayutthaya period presumably around themed of the 1600s.’

However, it is widely believed that the looters of these statues embedded with precious stones may have placed the head inside a pit at the base of the trunk with the intention of returning to claim it. In the coming years, the head was completely covered over by the roots, creating a living cast while leaving the details visible — right down to the small knobs in the headdress. 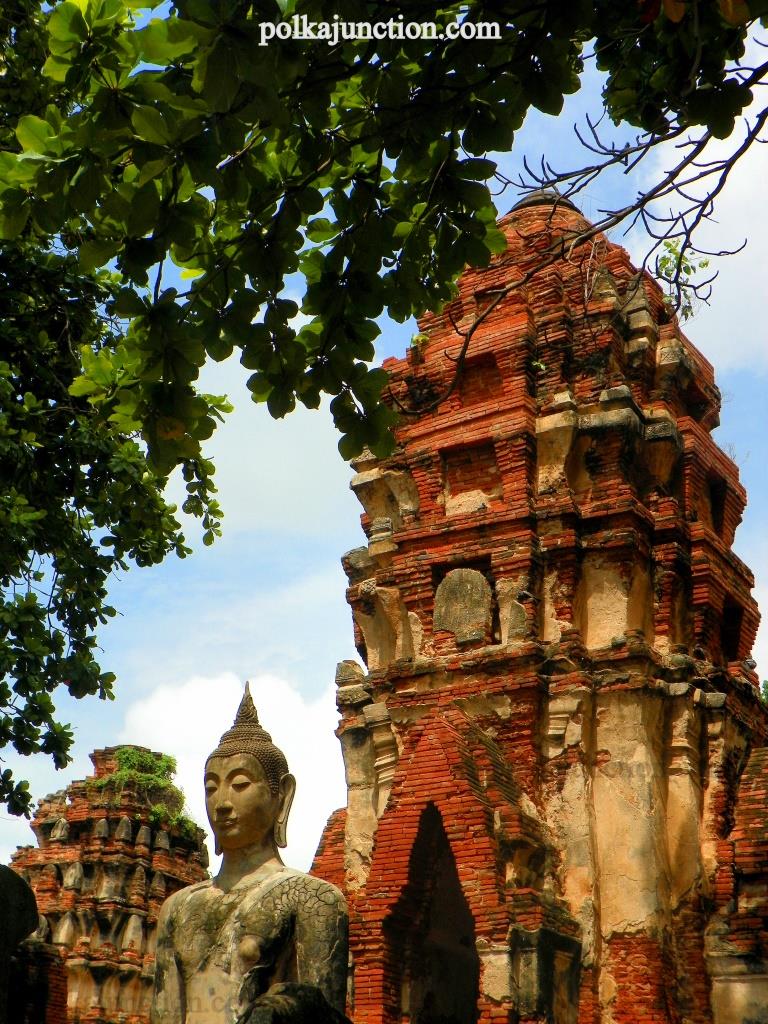 Just at the exit, before heading to Wat Phra Si Sanphet ( will be covered in the next blog-post), I stumbled upon a very vibrant telephone booth in contrast with the ancient ruins. It is overwhelming to observe that these ruins are revered and well maintained though crumbling, yet, in sync with modern influences all around. 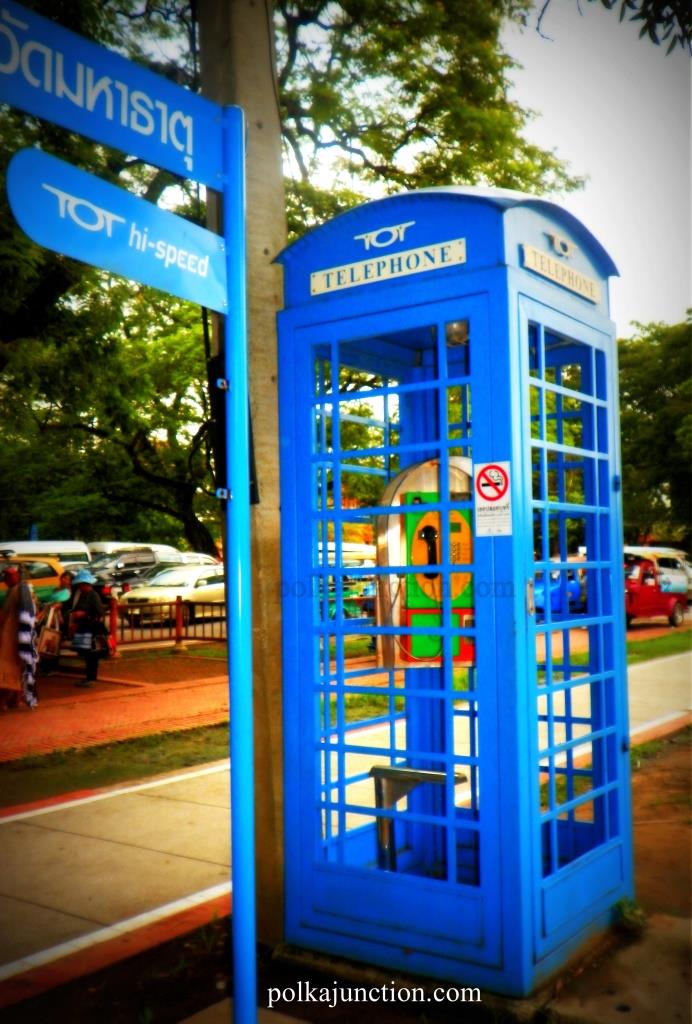 And, here is a German backpacker’s guide to Bangkok 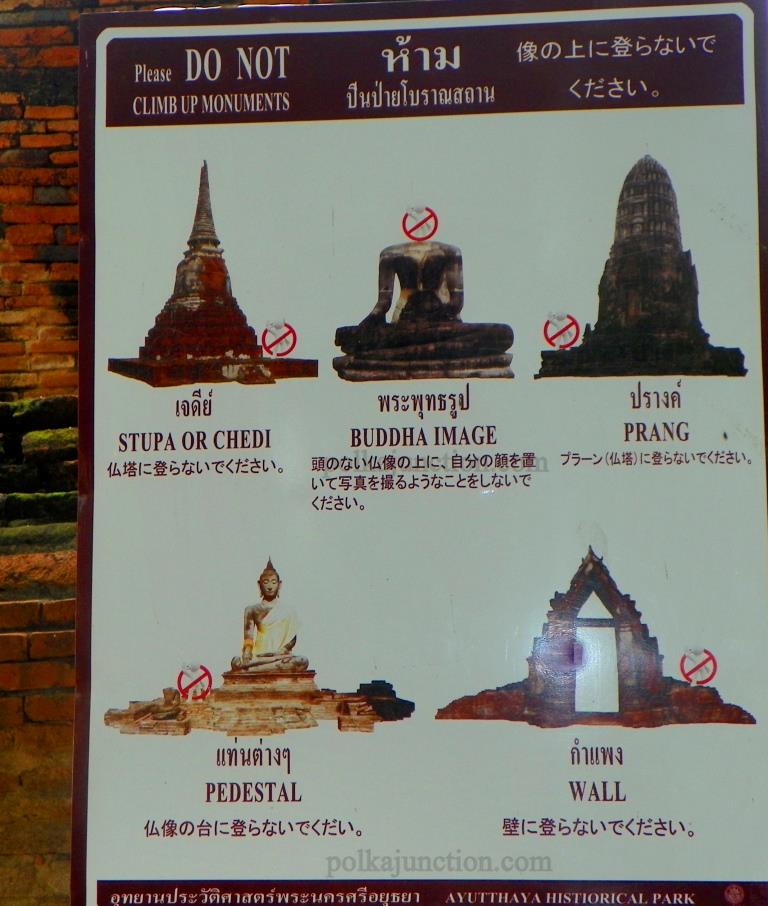 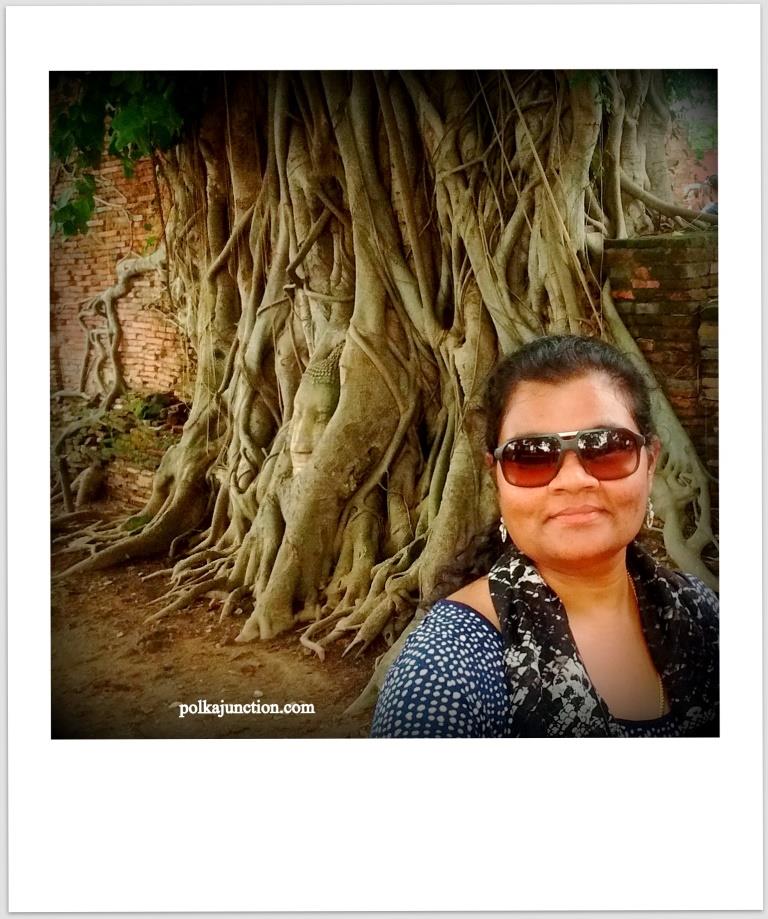 Dalhousie – A Colonial Experience In The Primeval Grandeur Of Himachal Pradesh!

City Palace Jaipur Architecture : 30 Photos to get you started on Responsible Tourism