The month of October always brings back fond memories of my trip to the backwaters of Kerala. It has been seven long years since we undertook our family trip to Cochin and this wonderful vacation remains as the most cherished sojourn till date. I love Cochin and is one place apart from Dalhousie, where I would love to settle down and lead the rest of my life.

A traveller or a tourist who visits Kerala should very well term his/her trip incomplete, without a boat ride in the serene backwaters of the longest lake in India- the Vembanad lake!

Tailor made-tours, homestays, heritage resorts and the internet have boosted tourism in recent times, but a decade back, not many reliable options were available to gain information about Indian states barring the Lonely Planet Guides and a handful of efficient tourism boards like Kerala Tourism.

We had arranged for a half-a-day boat trip through our hotel travel desk that was highly recommended by the Lonely Planet guide, too, in those days. But, apologies, I do not remember the tour operator’s name.

Most of the backwater rides start from Alappuzha or Alleppey, which is a town to the south of Cochin. I remember we had not opted to drive down to Alleppey due to time restraint. Instead, we had chosen a boat ride from a place which was just 45 mins of drive from our hotel in Ernakulam.

Here is a virtual tour of the trip we undertook, soaking in the brilliance of the serene and divine ‘God’s own country’. I am just reminiscing some peaceful time we spent on the boat doing nothing but connecting with elements of nature and appreciating village life for close to five hours. All this without littering the lifeline of Kerala- the waterways!

The blue sky was bejewelled with shiny white clouds while the chocolate brown earth was accentuated by the emerald lush greenery as we started the ride.The teal coloured water was shimmering and dazzling as a gentle breeze cruised past its surface with a periodic frequency under the soft sunlight. Ah! a perfect kickstart to a laid-back ride… 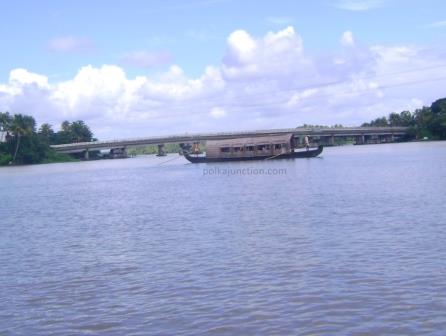 Slowly and effectively, the boat was navigated with perfection through the various narrow canals of the backwaters by the skilled boatsmen.The houseboats were beyond our budget and the many Shikara sorts of boats were found to be crowded and lacked the required peace to enjoy this natural beauty. Thus, for us, this country boat worked like charm. Also, these country boats are hand manoeuvred and do not pollute the water and being responsible is a sort of an ode to a place..isn’t it? 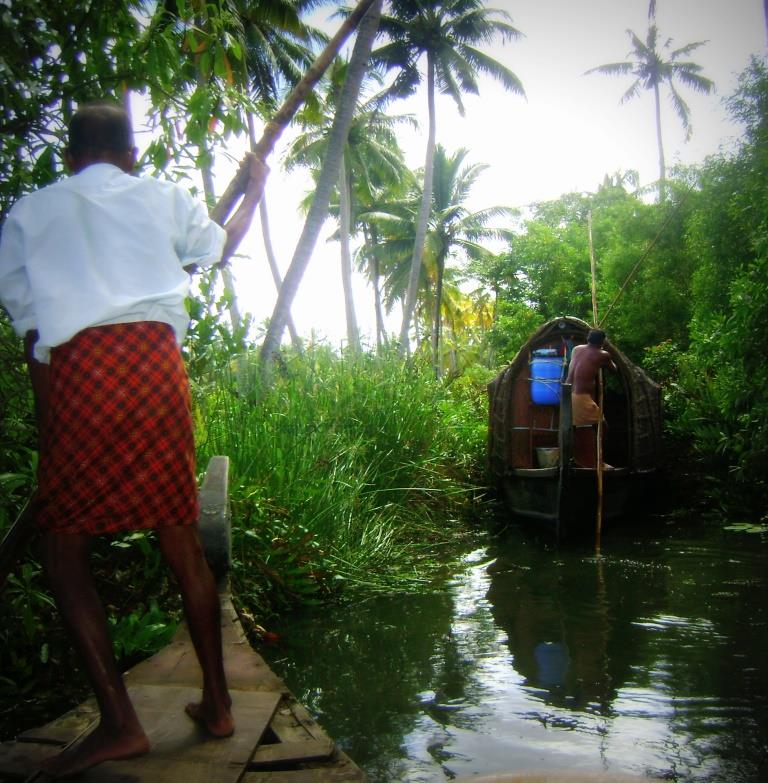 The riverine life of backwaters

The backwaters of Kerala have been used for ages now, by the local people for fishing, transportation and agriculture. A ride like this gives a glimpse into the riverine culture and daily life of villagers who have their homes along the sides of the water bodies. 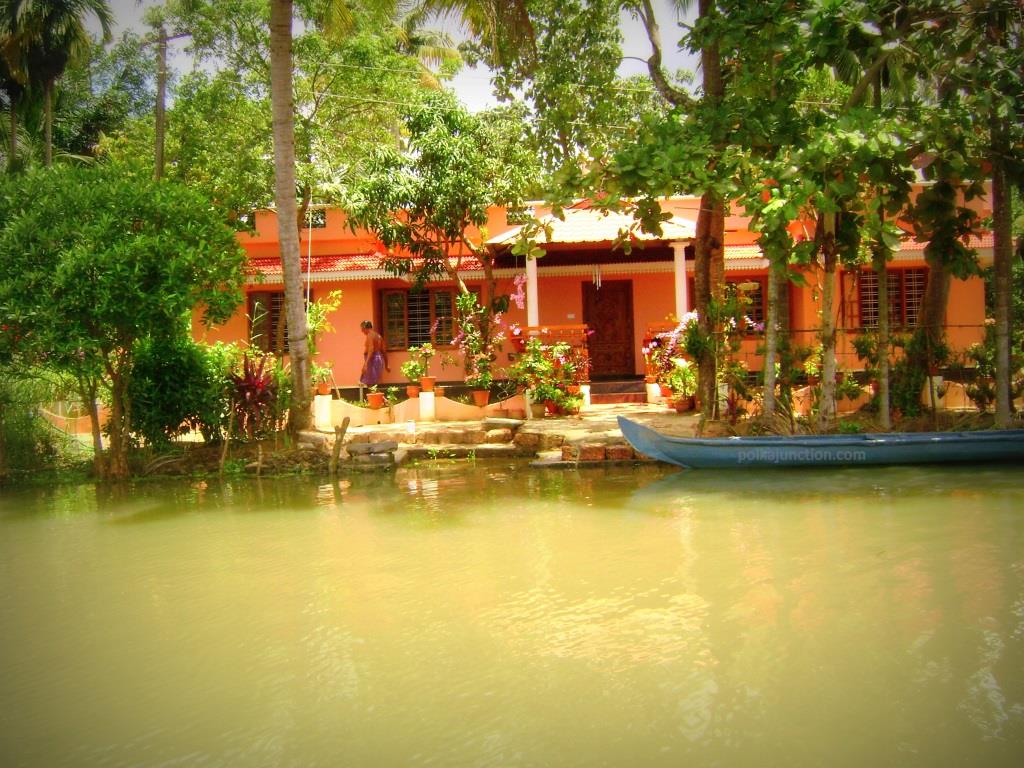 Many of the houses, had a small boat/kayak anchored in front of their homes that are used to commute from one place to another. The villagers went about their daily chores of fishing, farming,  coir making, spice cultivation, and shell mining. In a way,  these villages have benefitted by tourism and this industry has made them self-sustainable. 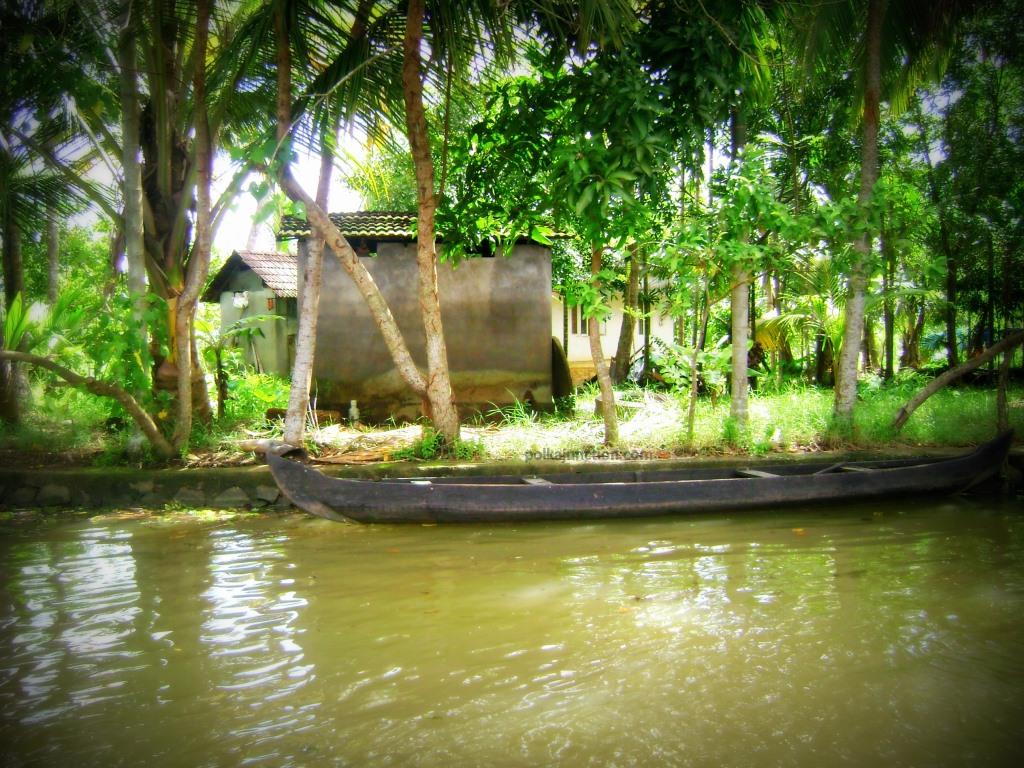 If there was a man busy with unloading sacks of cement there was another woman who was busy in knee-deep water of the canal, going about her search for clams. Yes, clamshell mining is one of the means of livelihood of the people in and Vembanad lake.

I also learned that clam shells are used as a raw material in cement manufacturing units, as an add-on in fertilizers and pesticides and in some cases as medicines, as well.

A visit to one of the villages on an island also gave us a closer glimpse into the making of coir. Kerala and coconuts are made for each other. A Coconut tree literally strips itself to provide a livelihood to its seekers and thus is called the ‘Kalpavruksha’.No part of the tree ever goes waste. Coir is known as the golden fibre of Kerala.

Do have a glimpse of the efforts in one of the steps that go into the making of coir rope, in the video clip

Many of the villagers also grew spices that looked organic and fresh. After all, it is for the trade of these spices that the Portuguese and the other invaders came to India. Nutmegs, Pepper, Bay leaves and other spices were being grown in these villages along the canals.

Flora and Fauna of the backwaters

The canals with backwaters ran into innumerable numbers and some of them looked eerie. 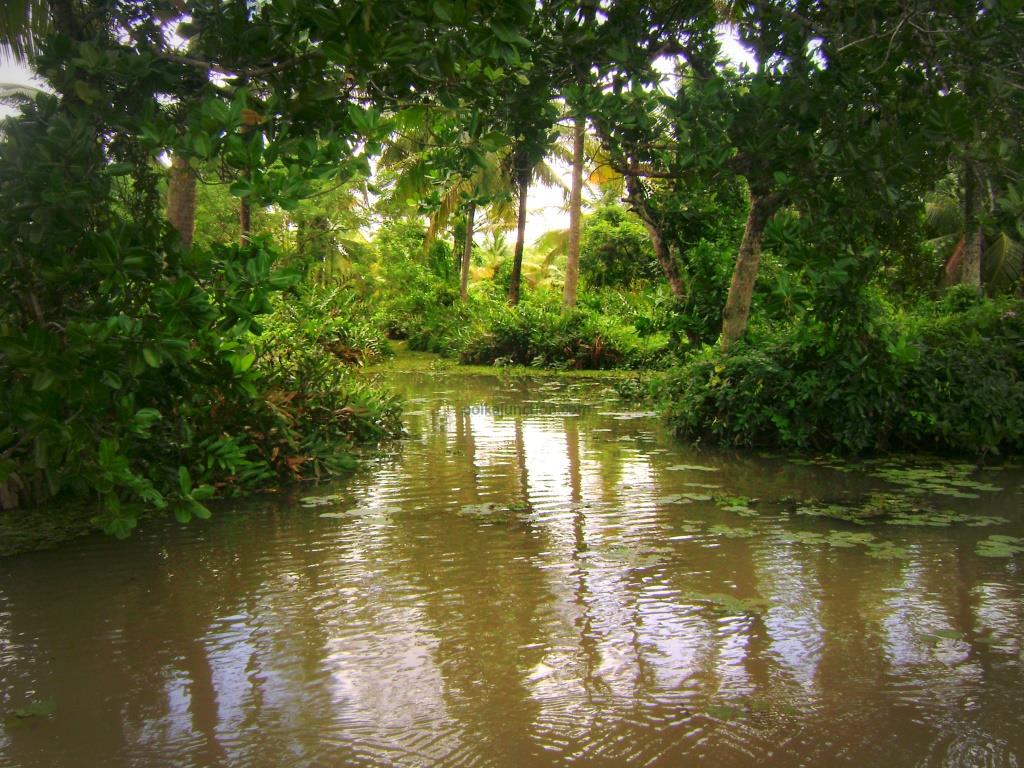 The widespread silence was often interrupted by the voices of the Neer kaaka (Cormorants)  that cooled itself in the backwaters. 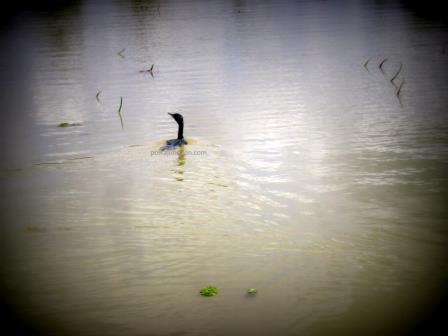 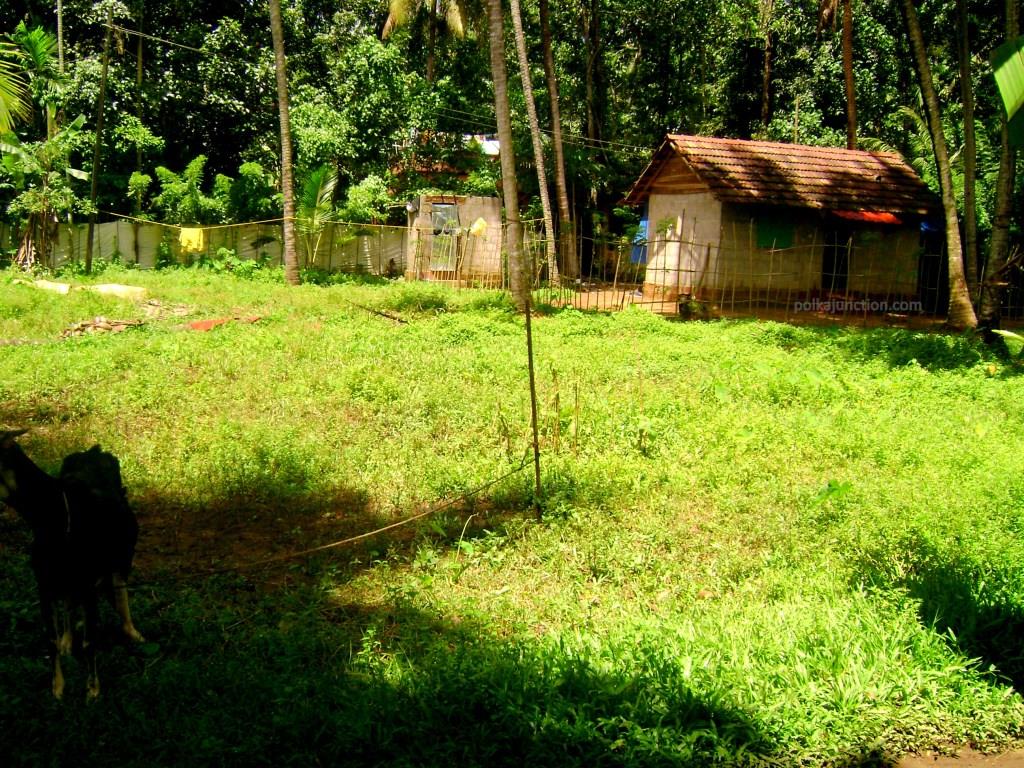 The darkness of the lush greenery was interspersed by the colourful blooms and not so colourful signboards! 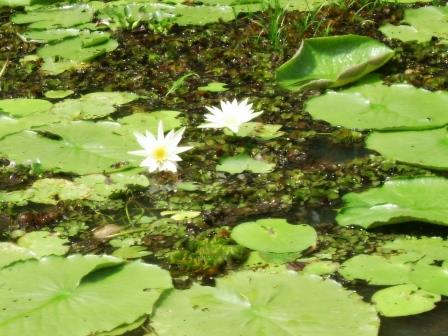 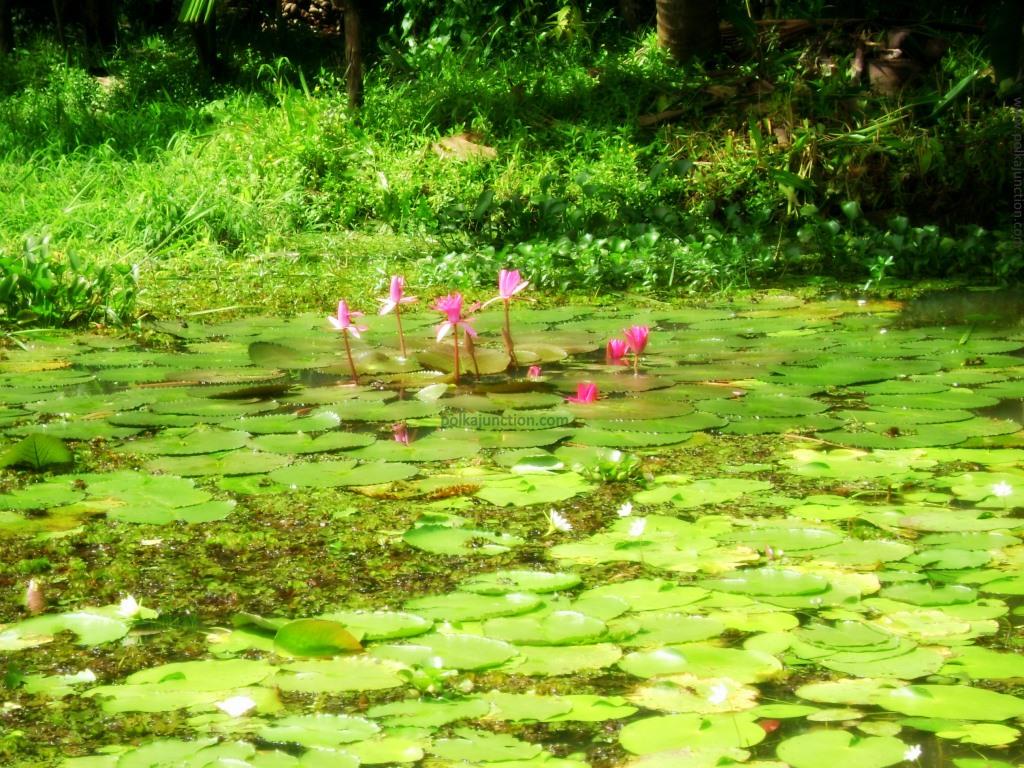 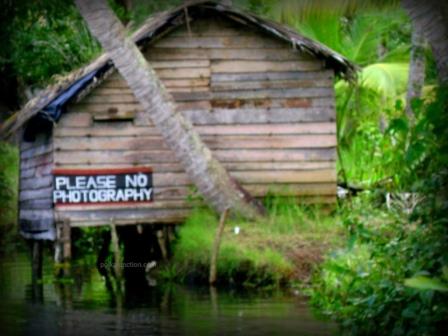 Soon, it was lunchtime and the boat was nearing an island. We were to have a traditional Kerala Vegetarian lunch in one of the village homes on this strip of land surrounded by canals on all sides. 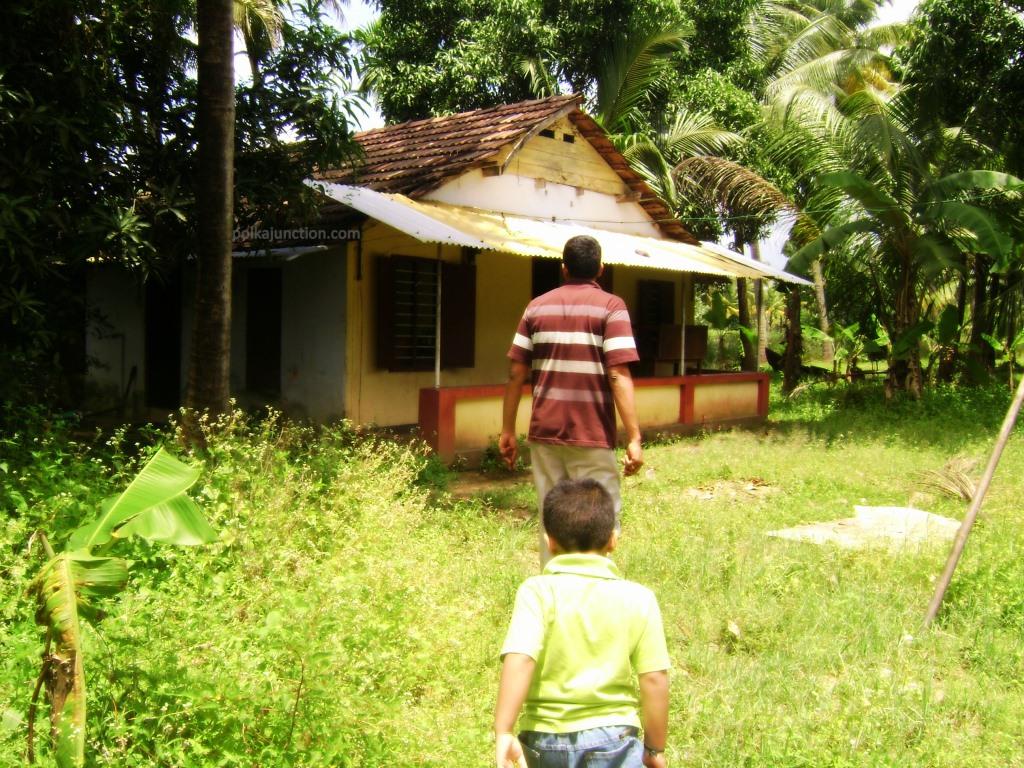 The spread was simple yet flavoursome and satisfying. 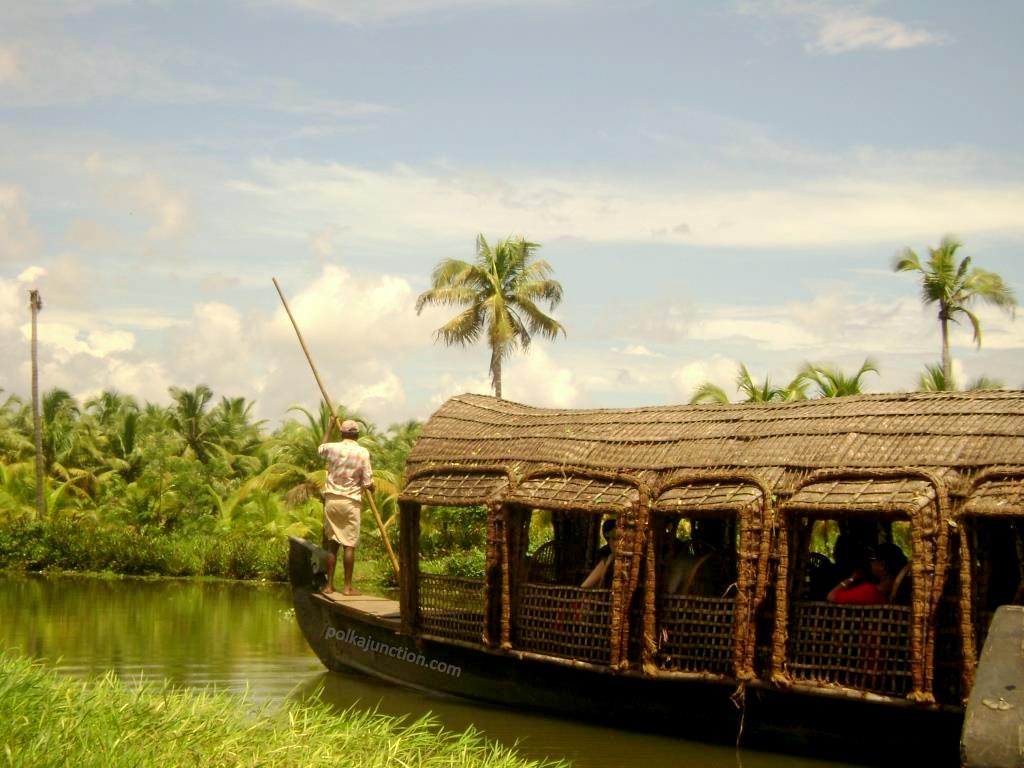 Post-lunch, the boat entered an area with a vast expanse of blue! For a moment, I wondered if we had entered the sea, but soon, the realization set in that we were actually afloat on the Vembanad lake. 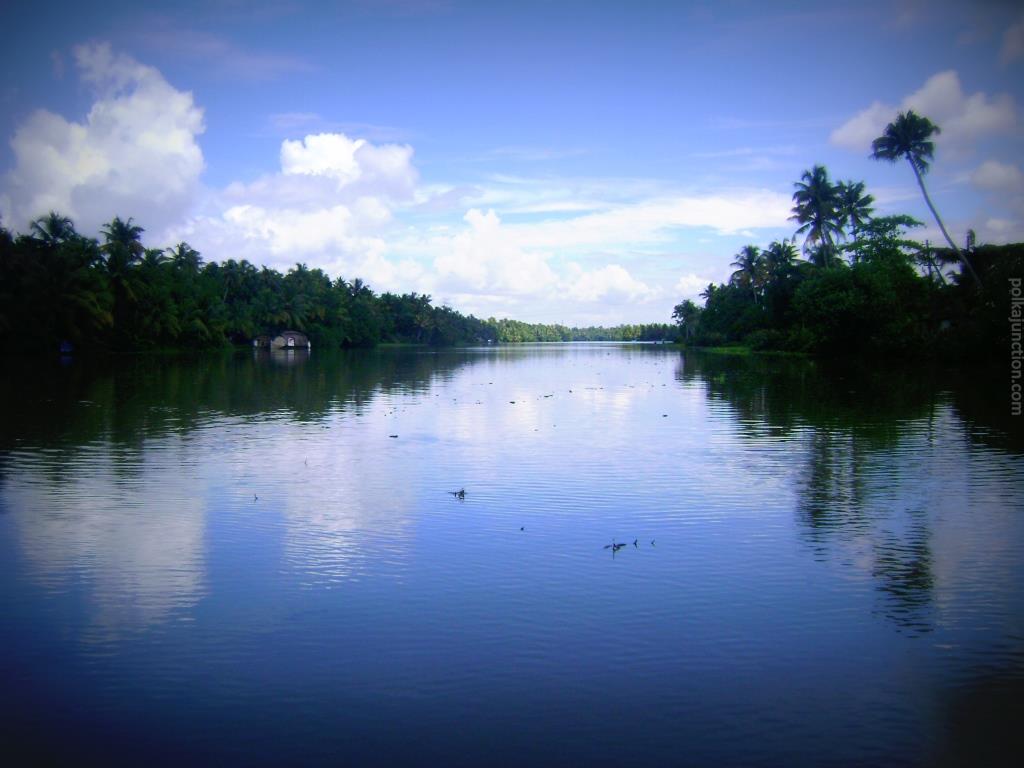 The wide blue water body was lined with inclined coconut trees that tapered on either side and looked as if this was the route to paradise.The sumptuous lunch, the cool breeze, the warmth of the sun and the picturesque sapphire lake put us into a deep slumber for the rest of the trip.

All through the trip, the sun was playing a peekaboo behind the clouds. If at one point, the sky looked bereft of the clouds, then just as we entered another canal, it looked joyful with grey clouds that were impregnated with rain. The photos of this trip looked vibrant with different shades and shadows as we sailed across the lake of Vembanad! 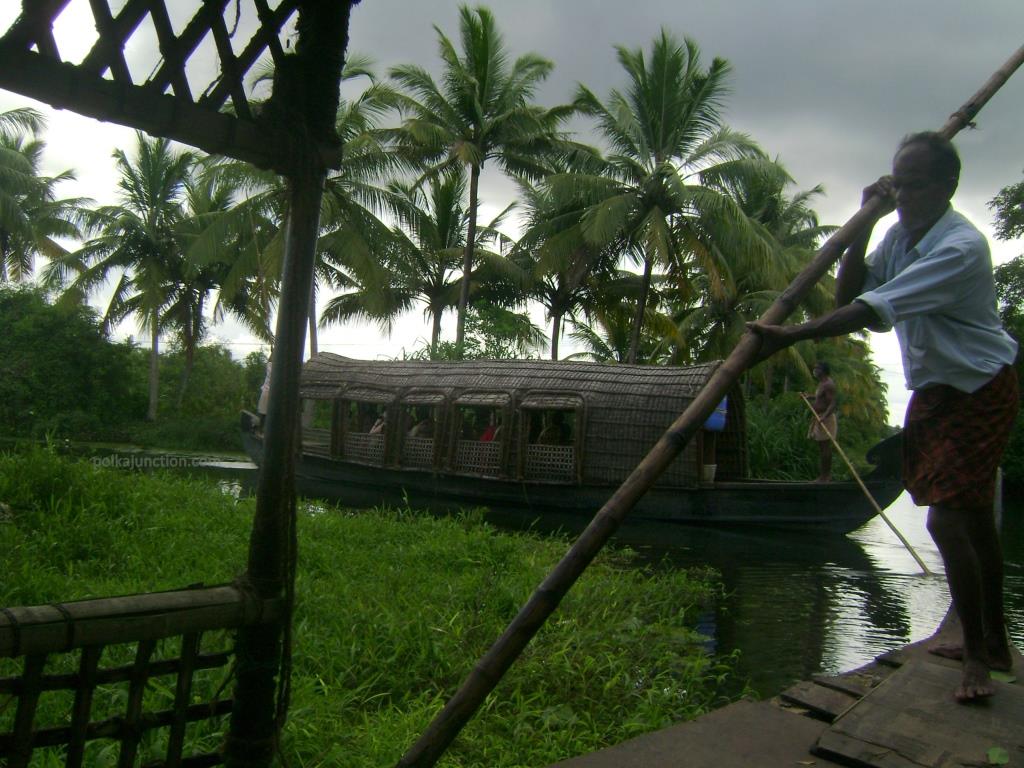 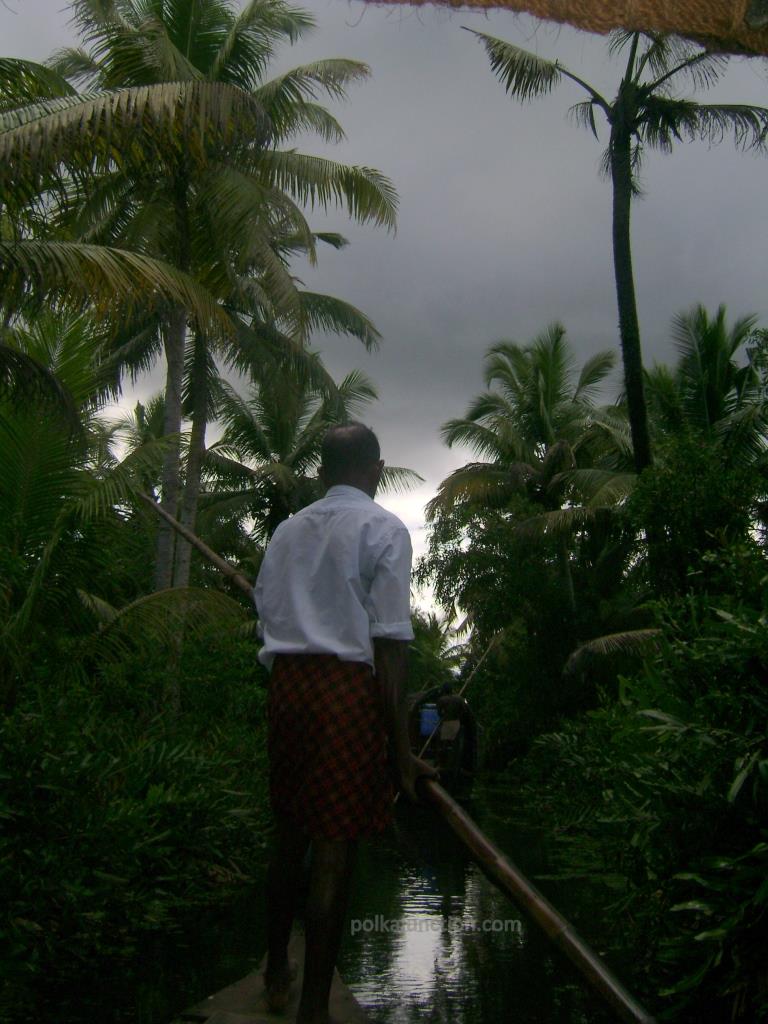 It looked as if the whole world was busy with chores except the mortals on this boat…Bliss! 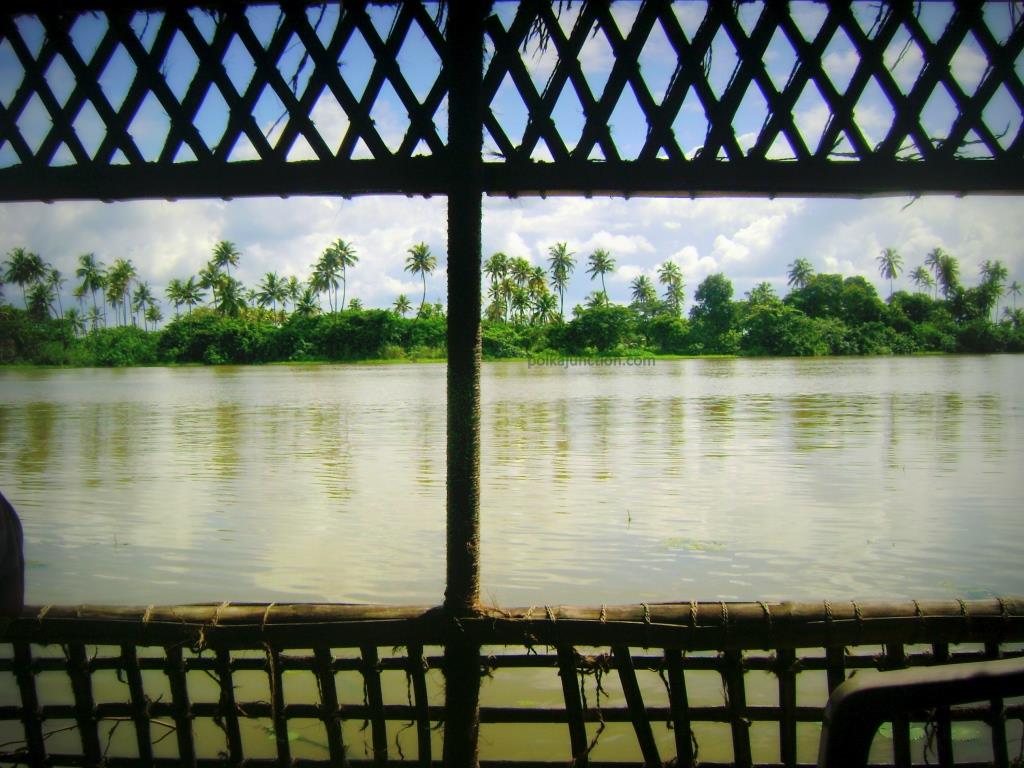 On our return to the dock, we saw some tourists throwing thrash into these canals. Empty water bottles, packets of chips and other wastes lay strewn amidst the flora and fauna. These acts of foolishness are the reason why tourists lose respect in the eyes of the locals.We as tourists and travellers need to be more responsible and make sure we educate others too on the importance of responsible tourism.And this indeed is the need of the hour. 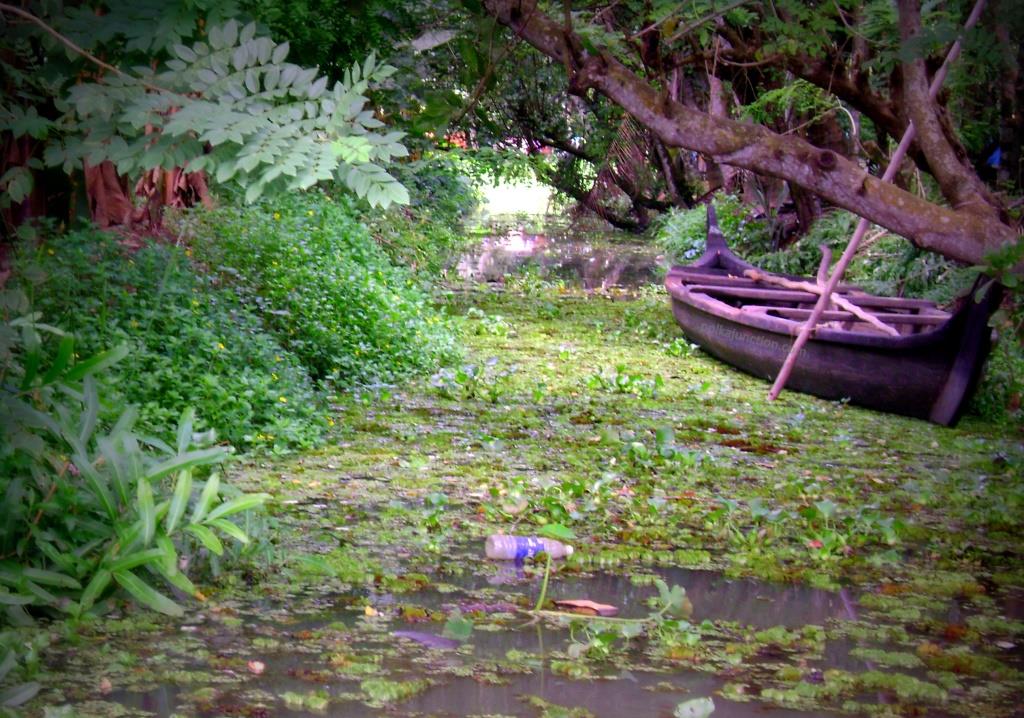 That one waste bottle floating in the picturesque canal still haunts me and is part of my memory of that otherwise memorable trip, at the end of which ,we were reluctant to disembark from the boat ….. 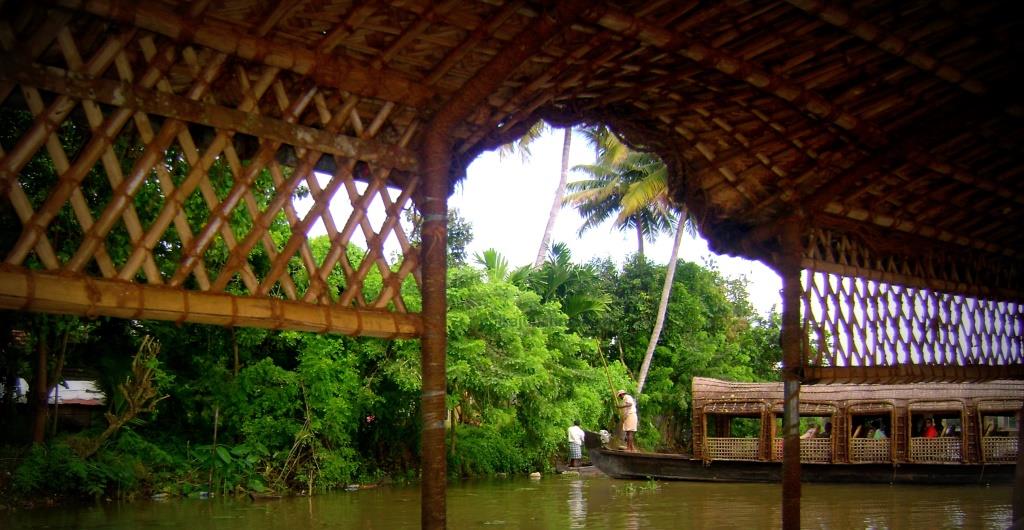 Have you been on a tour to the backwaters? Did you opt for the houseboat or the country boat? Do share your thoughts with me……

All the photos in this post have been captured by me on my very first digital Camera – SONY DSC  in the year 2010! 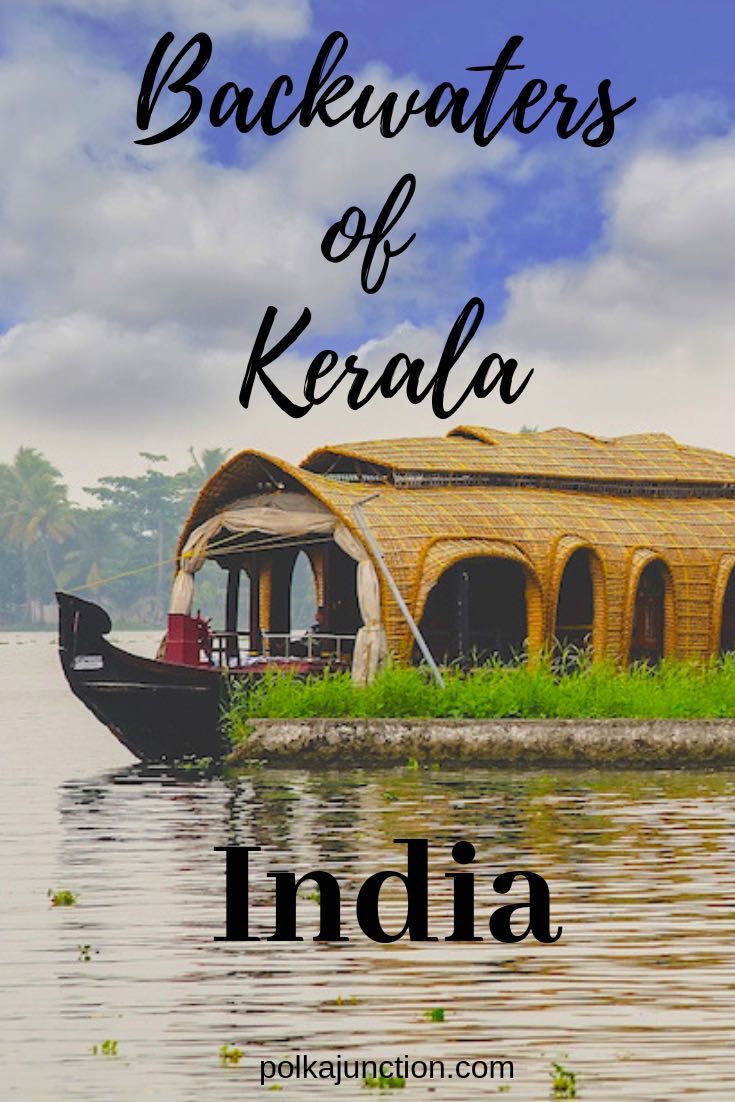 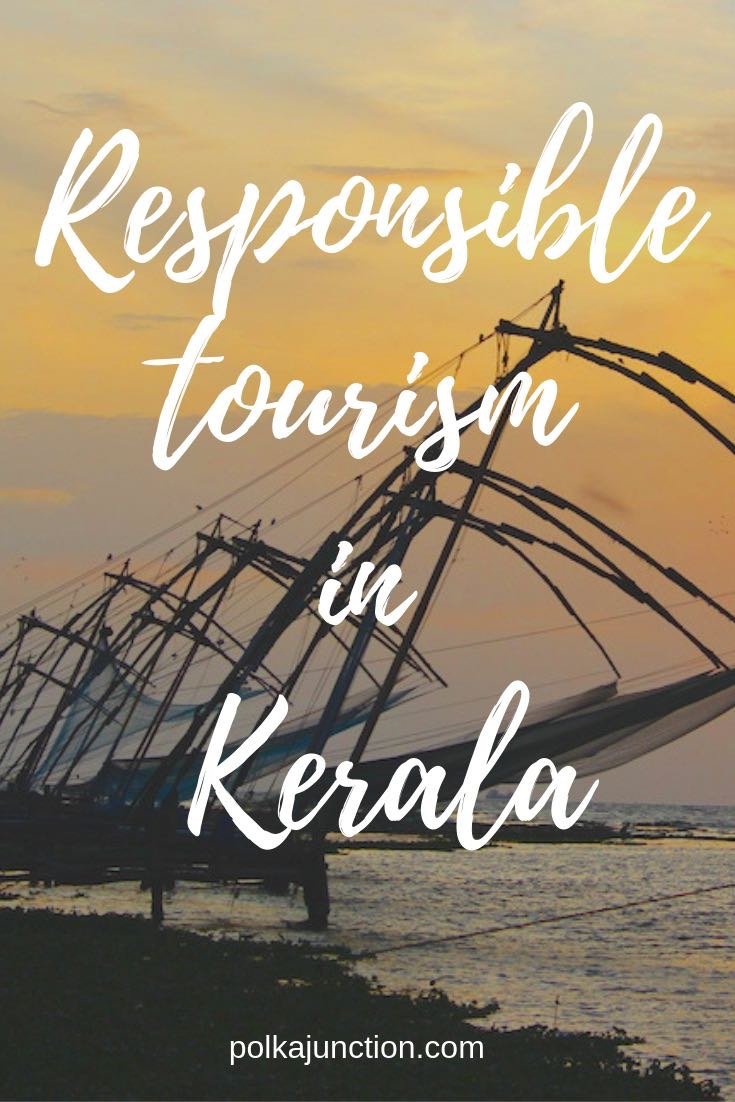 Braving the waters of River Ganga