A casual conversation at a heritage property in Surajgarh we were staying in, led us to a quick morning trip to Kajra in Jhunjhunu, Rajasthan. Passing countless acres of rugged land filled with succulents and shrubs, trudging uphill bumpy roads that levelled at times and wading through narrow lanes, brought us face to face with miles of verdant agricultural land. The fields looked beautiful with florescent yellow flowers swaying in the gentle breeze of that winter morning.

Kajra is not a usual stop-over for tours covering the famous ‘open-art gallery ‘ region of Shekhawati. Nevertheless, this village has its share of havelis and frescoes to add vibrancy to its mundane existence. Slowly but steadily, the havelis are being restored in parts, hoping to grab the attention of travellers who pass by the district of Jhunjhunu in Rajasthan.

The nondescript village surprisingly serves as a centre for educational pursuits of students from nearby hamlets and towns. With a handful of government schools and private schools alike, the village was buzzing with sounds of children from nearby schools on the day of our visit. 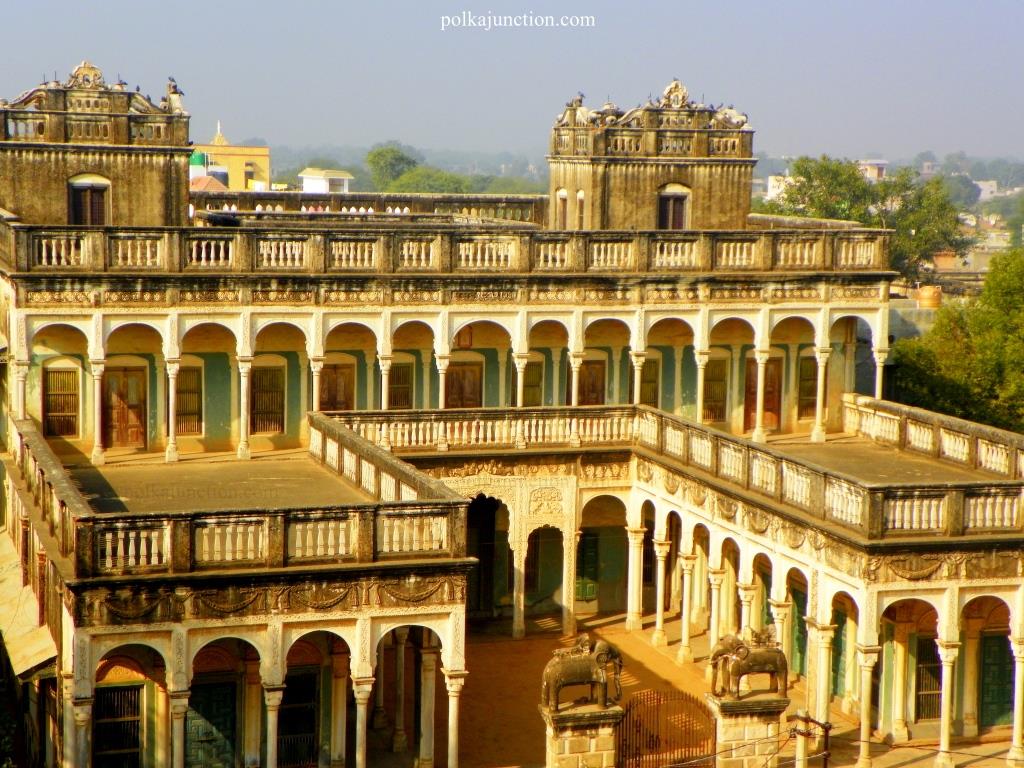 History of the havelis at Kajra

Kajra situated between Pilani and Surajgarh is well known for the Kajaria Havelis belonging to scions of globally reputed Kajaria Ceramics. There exist four havelis in a particular lane belonging to this family. These havelis were built by the talented Chejaraas (masons) and Chiteyraas (painters) of this region on being commissioned by the affluent Kajarias . They have a mix of medieval and contemporary architecture. Marwaris (are) merchants and traders by profession, thus, they travelled a lot for business purposes. So, it should not come as a surprise if one finds imported Burma teak, Italian marbles and figurines and stained glass paintings adorning their palatial homes.

The architecture of Kajra havelis

These 19th-century majestic edifices loomed over us from either side as we alighted from our parked car, upon reaching Kajra. The sheer magnificence and architecture of the havelis instantly took me back to my childhood days spent in the by-lanes of Karaikudi in TamilNadu, famous for the palatial homes of Chettiars.

One of the four havelis has been renovated, given a fresh coat of paint and is open to guests of Surajgarh fort. The village of Kajra isn’t home to 18th-century havelis like other towns of Shekawati region. Rather, both Surajgarh and Kajra have modern yet old styled havelis belonging to the 19th century with imported marble floors, opulent corridors with European arches, frescoes depicting modern inventions, western lifestyle and motifs.

The havelis of Kajra, stand still as if cocooned in a time capsule, ready to transport and reveal the hidden secrets of a bygone era to its inquisitive visitors. An old world charm and inquisitiveness entices the visitors and throws them into a trance upon entering these mansions. I feel that an unfettered USP of such havelis is the mammoth living space and vibrant frescoes apart from ornate doors and colourful windows that lacks in constructions of today’s time. 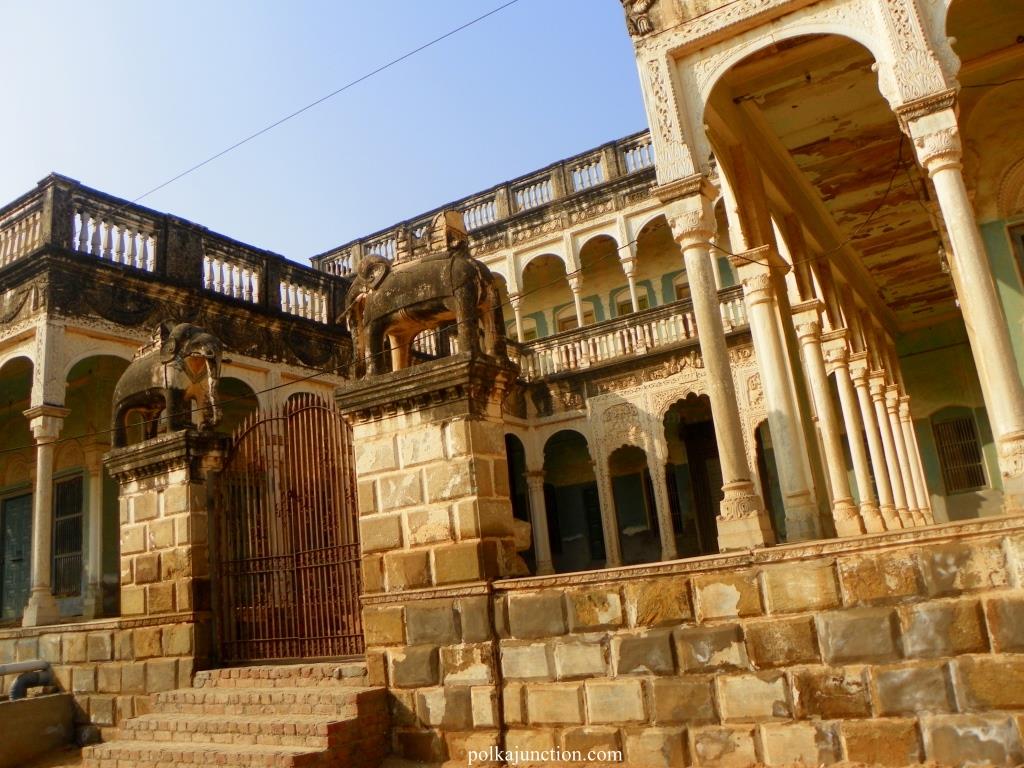 The difference in havelis of Surajgarh and Kajra

I observed that the 19th century havelis differ from their old counterparts in having elements like rounded arches  at many places that replace the traditional cusped form, extensive use of wrought iron, cast iron railings and round pillars in beautifying the interiors and in elaborate verandas that are added in front of havelis in place of the traditional toran dwar . These verandas have a small fountain adding a western touch to the havelis in Kajra. Unlike the havelis in Surajgarh, the Kajra mansions have a hint of privacy with an addition of boundary wall. The architecture of such structures is definitely a reflection of times we live in. From living and sharing as a society, we have evolved into isolated beings surrounded by people separated by walls!

The main entrance or toran dwar in these havelis has been pushed inside due to the construction of a wall. Unlike, the 18th-century havelis which had the main entrance on a raised plinth defined by a huge gateway with two gokhas (arched space with pillars), these 19th-century havelis have an elaborate open-space serving as a verandah with the must-have fountain in centre. 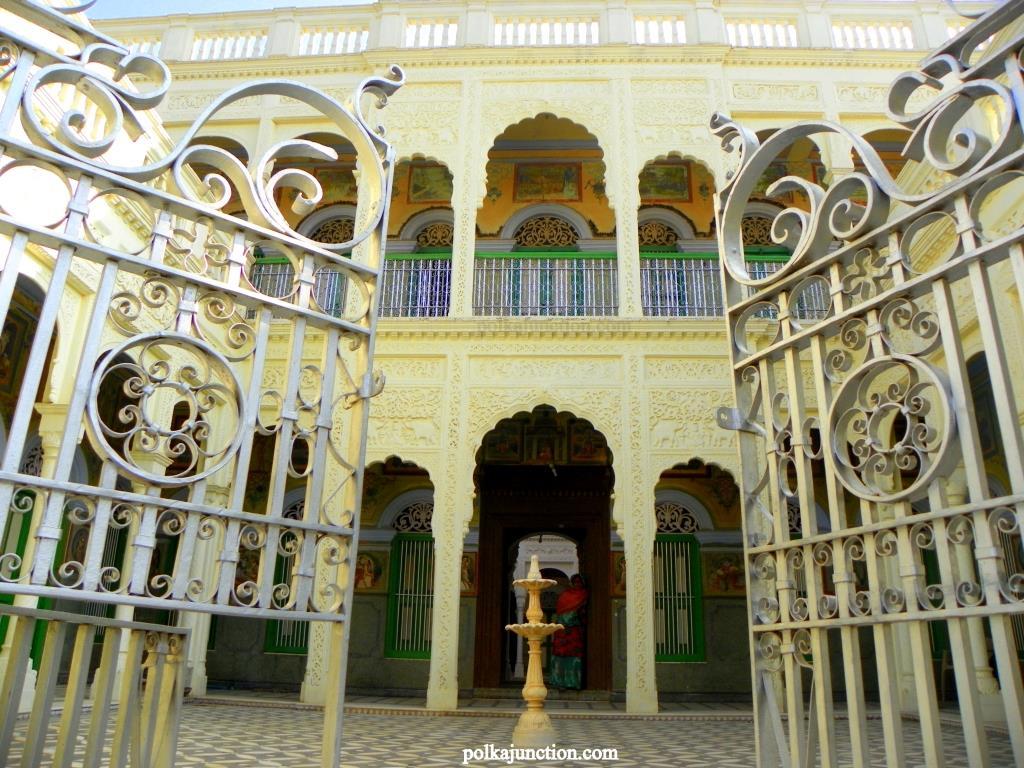 The outer poli (transtional space) that led to outer chowk having a baithak on either side in old havelis has been modified in the havelis of Kajra. The baithaks are missing! The main door leads to the inner chowk having several sets of rooms known as sal. The haveli also encloses two more chowks inside and our walk inside seemed never-ending!

Rasoi or kitchen is arranged around the last chowk literally at the back of this haveli. The washrooms were also on the side of this section. Tulasi Chaura(sacred basil) adorns the center of this chowk. Surprisingly, the kitchen is not very huge but is well-ventilated and the women of the house must have definitely enjoyed the art of cooking in this corner surrounded by huge open spaces! 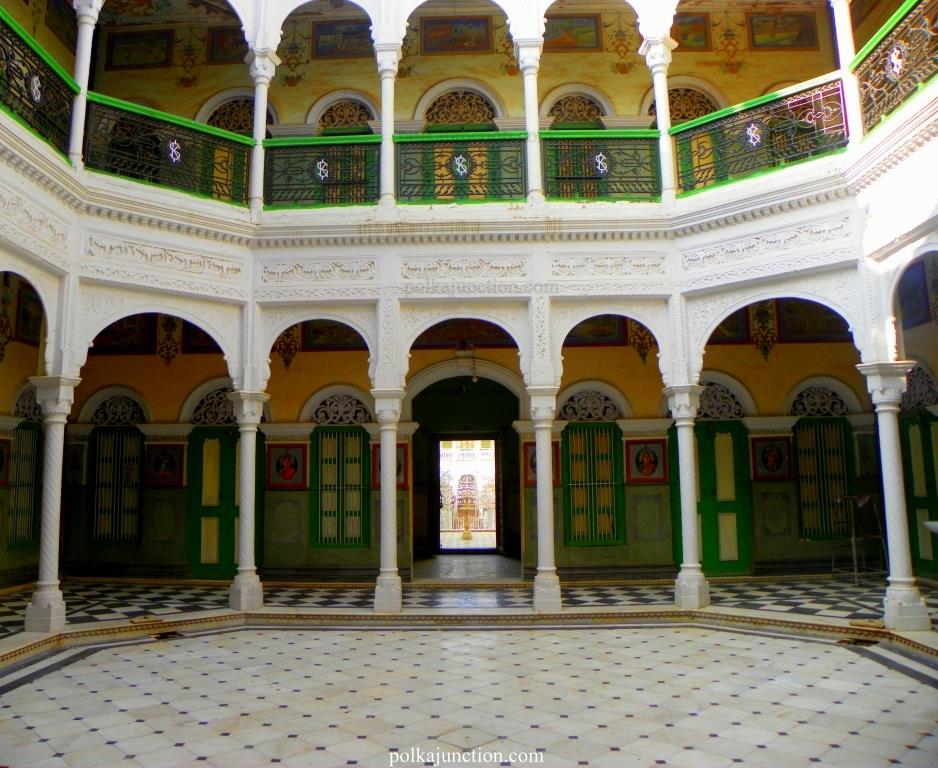 I wanted to have a look at the terrace. So, we took the Nisherni or stairs that provide access to the upper floors. These were decorated with colourful stained glass paintings for windows. The upper storey consists of bigger rooms with frescoes that depict floral patterns and western figurines. Storage spaces called Duchhati has been provided in these rooms. We hardly required artificial lights and fans for our tour inside the haveli. The construction is such that there is a constant flow of natural air and light even inside the rooms. 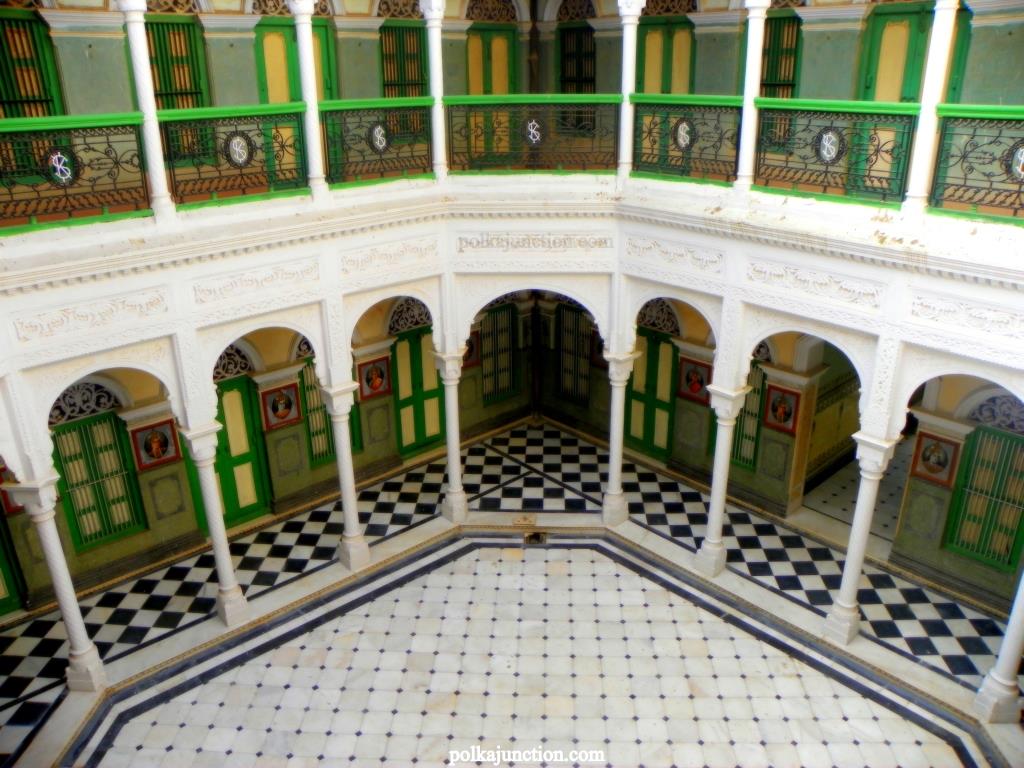 The Chhat or terrace was massive and gave a wonderful view of Kajra village and surrounding havelis. However, the pigeon droppings have created a havoc around and constant maintenance is required for hygienic surroundings. 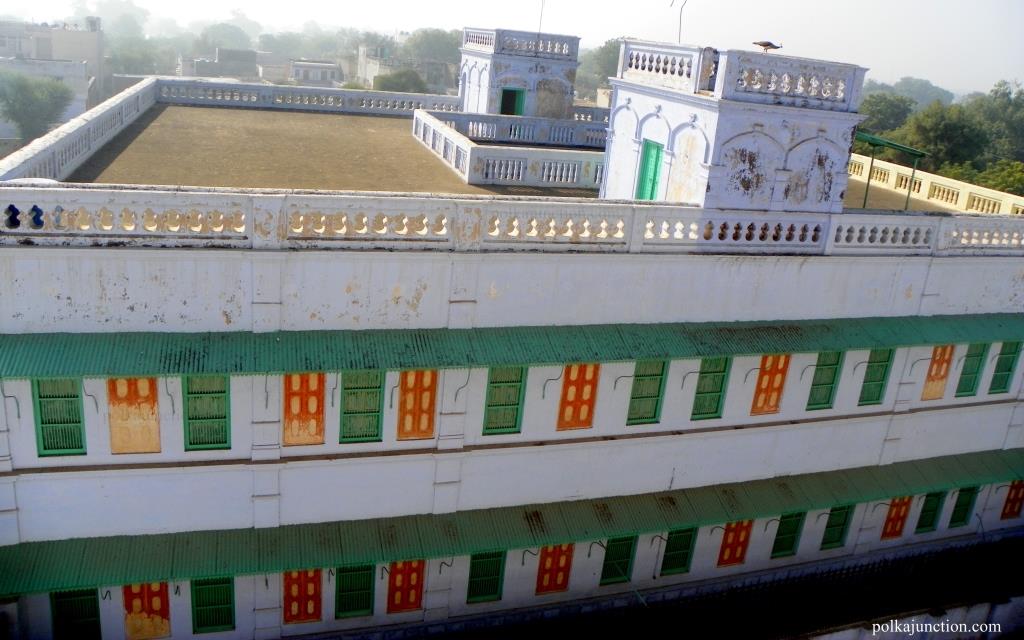 A separate nohra or space for facilities like keeping domestic animals and rooms for servants or guests is a part of this haveli. There is space at the back and rooms are on either side of the steps leading to the verandah. These lack the opulence of the rooms above. 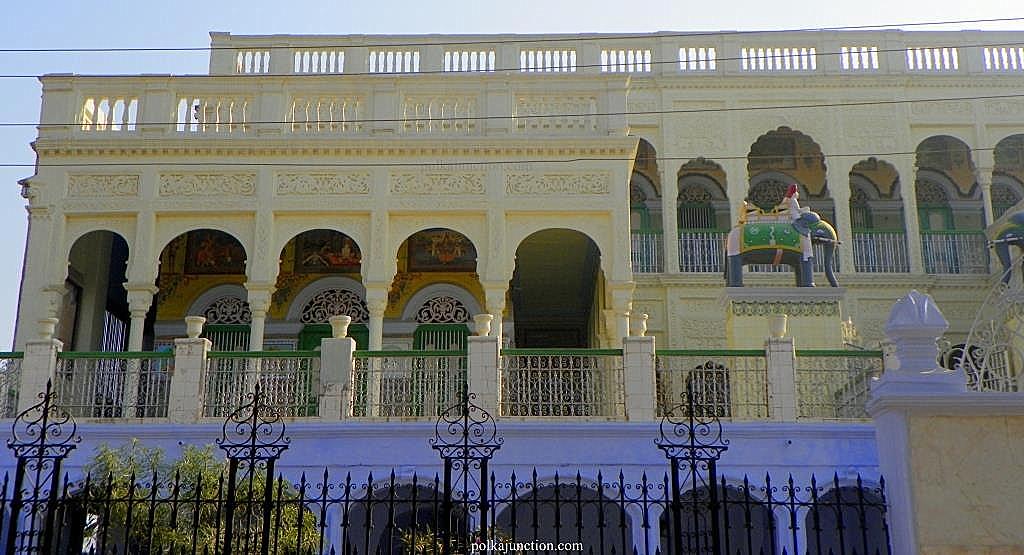 I have a penchant for doors and these havelis of Kajra did not let me down. The main door and frames are elaborate and intricately carved while the other doors have a modern yet vibrant look. The carvings on the main door include geometrical and floral patterns. These carved doors are further plated with brass. And a constant in all the doors in this region is a figurine of Lord Ganesha, flanked by wither elephants or apsaras fanning him! The usage of timber and teak is limited to nil and the wood that makes the doors and windows are locally sourced. Some of the doors very similar to the ones at Alwar. 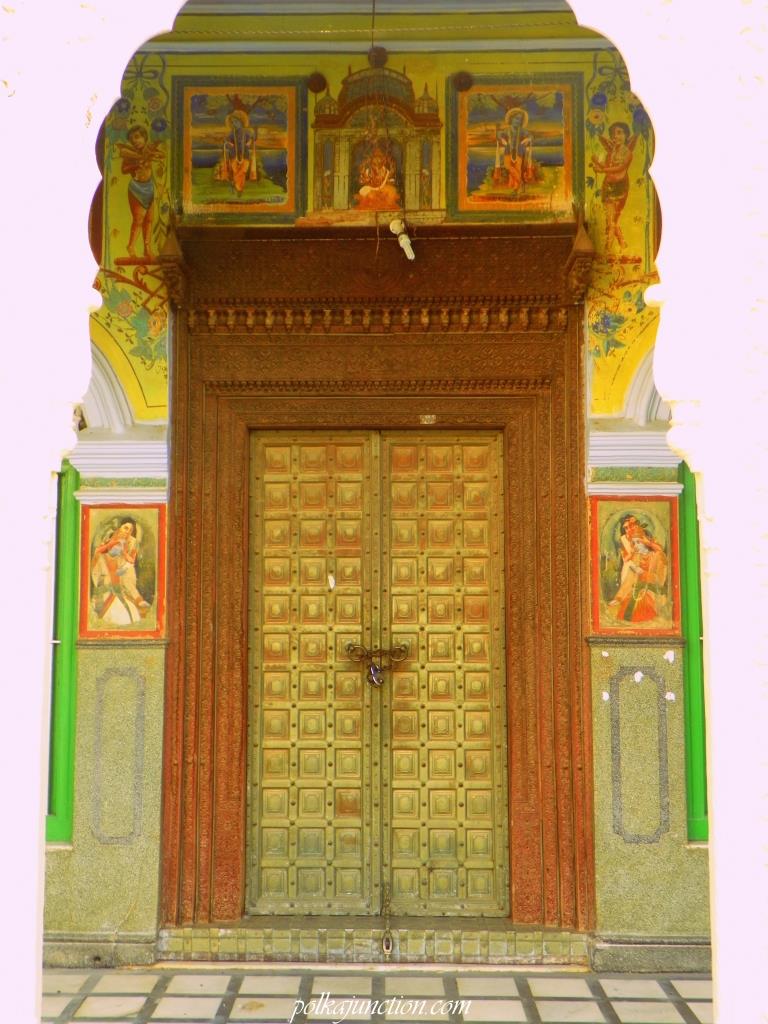 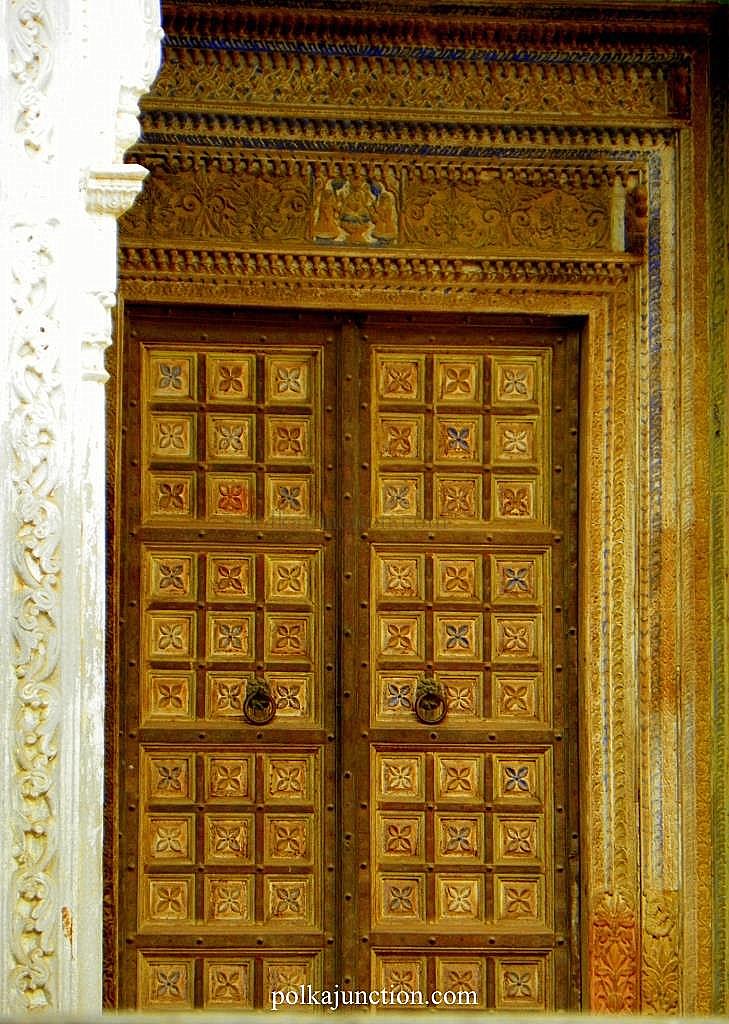 Shekawati region is widely nicknamed ‘Open Art Gallery’ for its generous display of frescoes, murals and vibrancy. Unlike18th-century havelis of Shekawati, the frescoes of Kajra are not very elaborate and extensive. I was more impressed with frescoes of the havelis in Surajgarh than in Kajra. The frescoes here are not very appealing in their strokes and seem to have been etched ( given a face-lift) using artificial colours. Also, they lack the charm of their 18th-century counterparts. 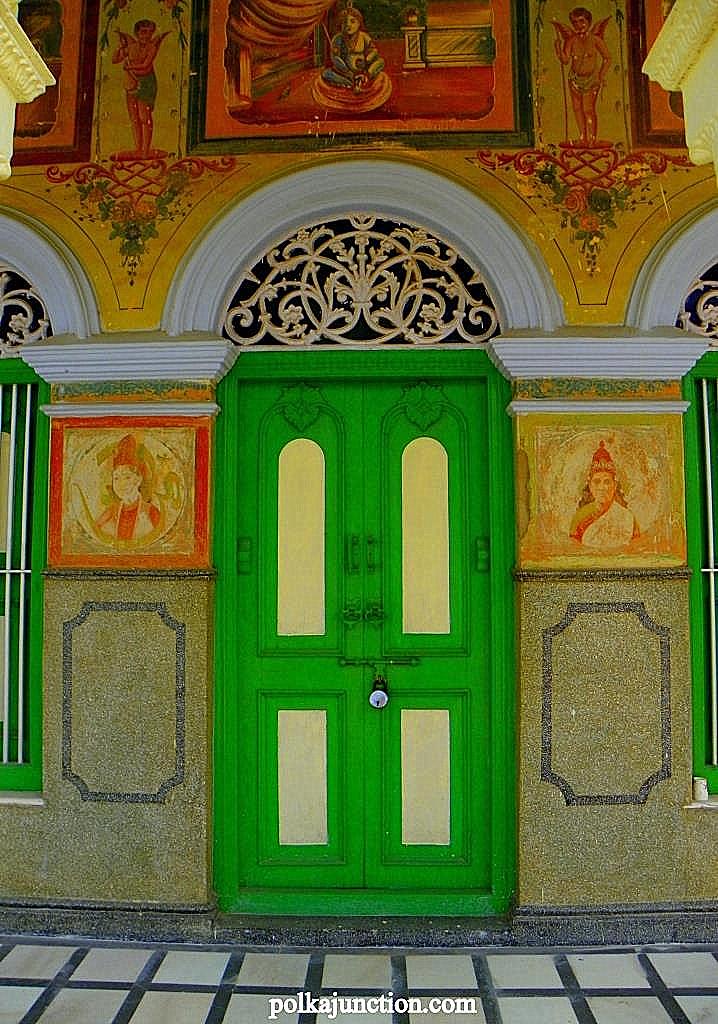 Apart from frescoes that had Lord Krishna paintings as a constant, these havelis also include sculptures as decor. Stucco as a new form of ornamentation has been used widely across the facade thus adding wonderful carvings on the walls. 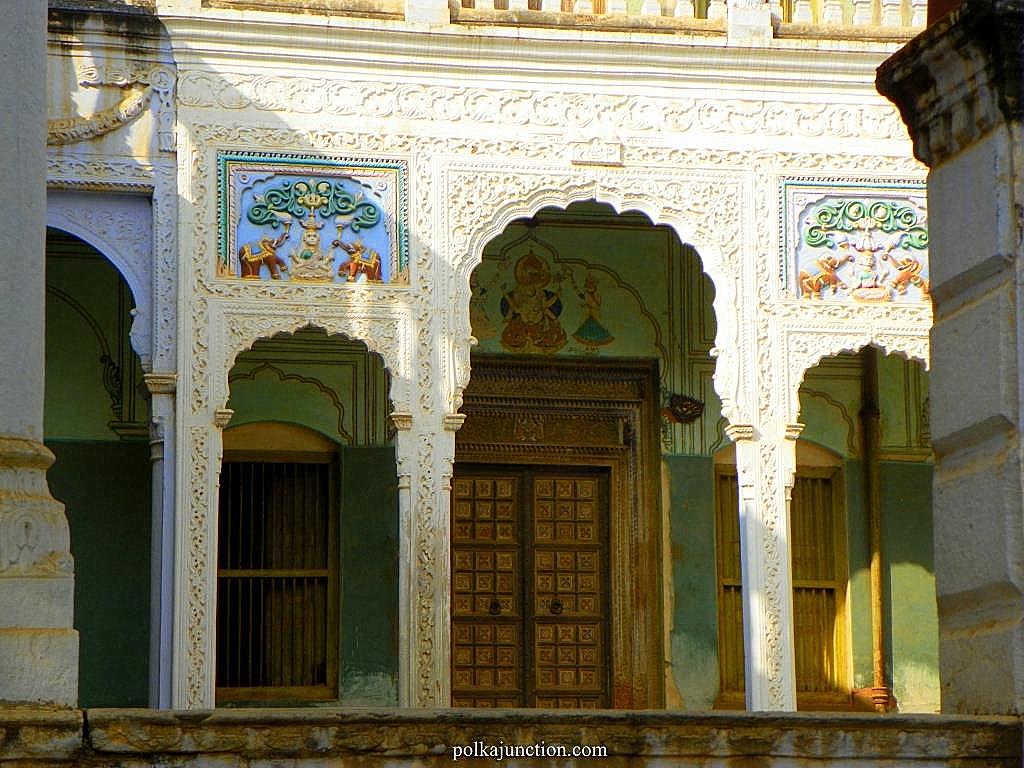 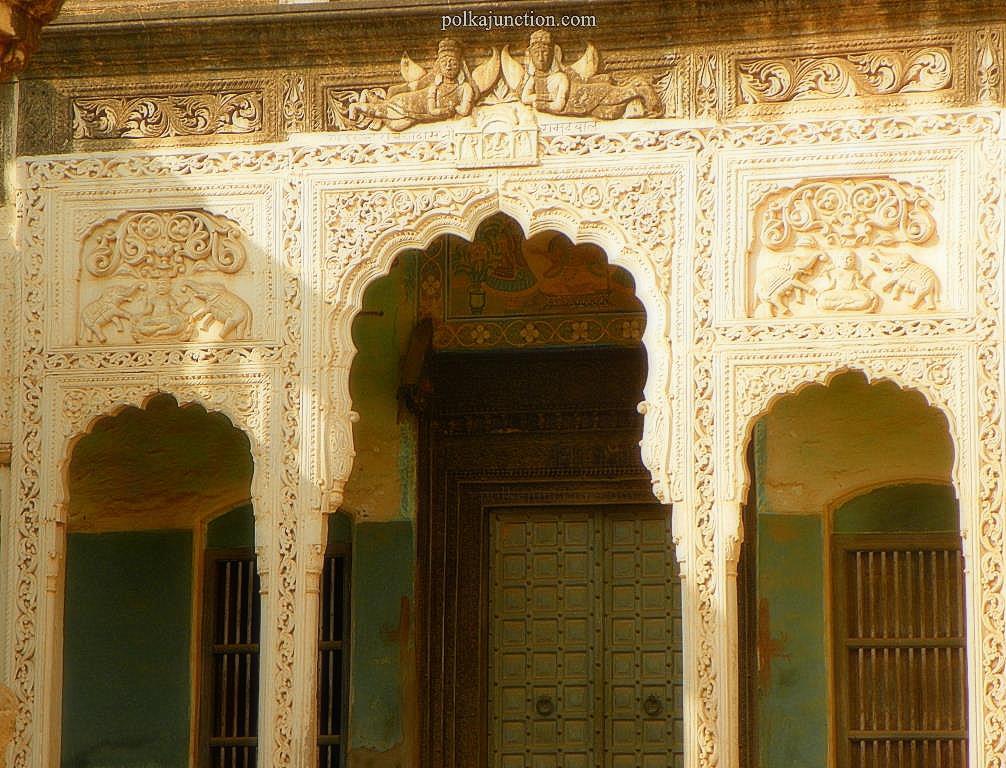 The 18th-century artists had etched frescoes using natural vegetable and plant dyes mixed with lime water. The organic colours are supposed to set naturally along with wet plaster protecting the fresco from harsh weather conditions. Sadly, over the years most of these frescoes have peeled off and look pale due to exposure to weather conditions and utter neglect sans care. In my honest opinion, many of the paintings have been ruined under the garb of renovation by usage of artificial colours.

While I was there, renovation work was still going on and sadly the drab whitewash was not serving any purpose for restoring the lost glory of a bygone era! 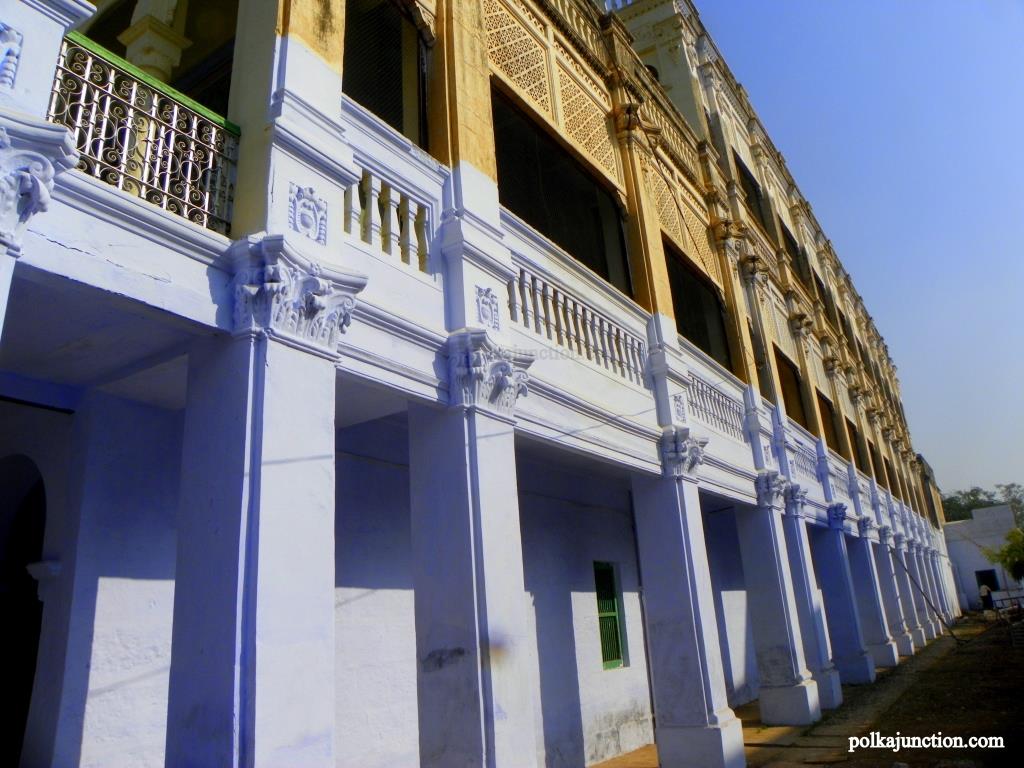 Do visit and seep in the old world charm of havelis in Kajra before they meet an unfortunate fate in the unaesthetic hands of modern workers.

How to reach Kajra

Kajra is around 8-10kms from Surajgarh town. I would not recommend an isolated visit to this village. Instead, a visit to Kajra could be clubbed with a day tour to  Shekhawati region from Surajgarh fort or vice-versa. If you are planning a visit from Delhi or Jaipur, I recommend you to stay at the Surajgarh fort for a night and then proceed to enjoy the havelis of Kajra at around 8 AM and then continue with a haveli tour of Mandawa, Nawalgarh and other places.

There are no viable stay options in Kajra. The best place of stay would be Surajgarh fort that has now been turned into a heritage resort.

Disclaimer: Our family embarked on this trip with no sponsored stays and hospitality. I have not been compensated in any form either by owners of Kajra havelis or by the management of Surajgarh fort to write this article. I am just sharing my experiential review for the benefit of my readers.

Leaving you with some more photographs of Kajra havelis. 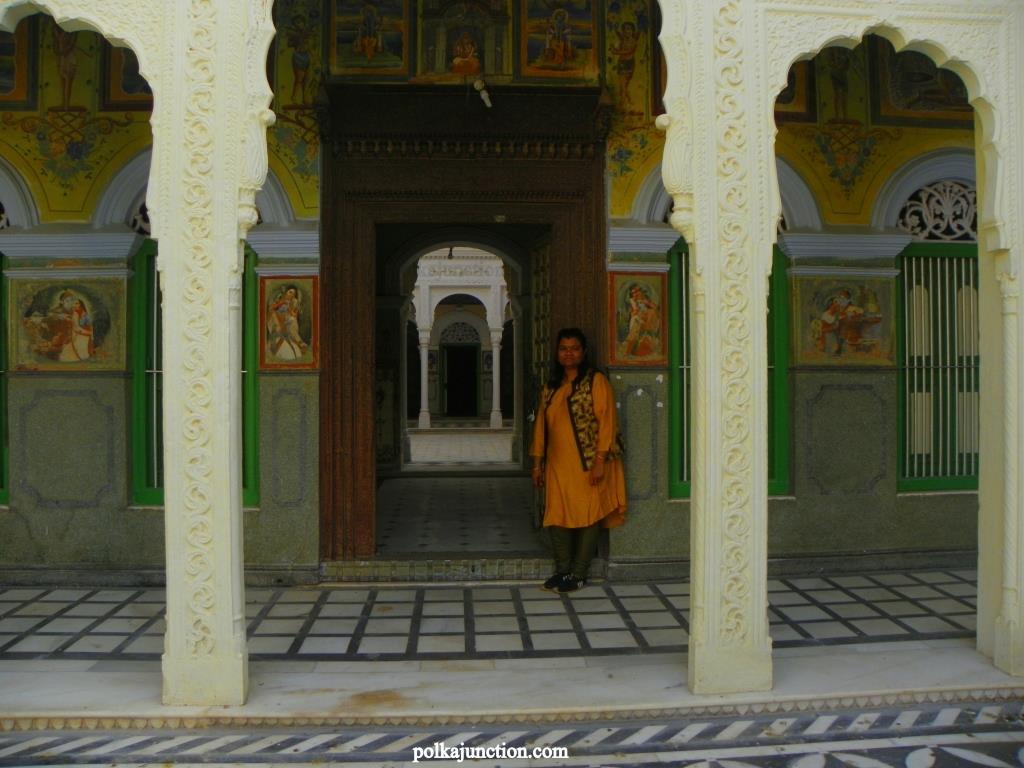 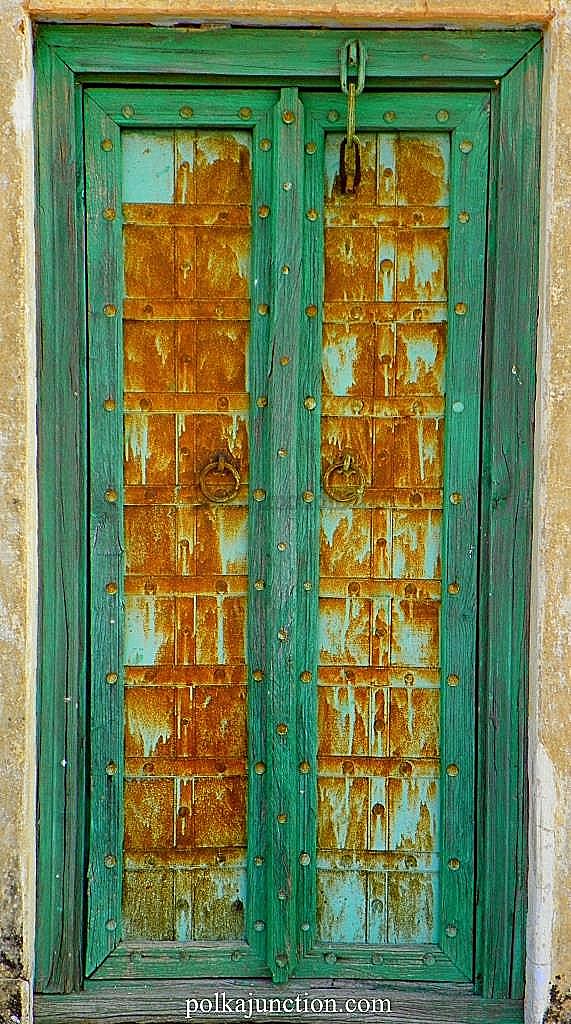 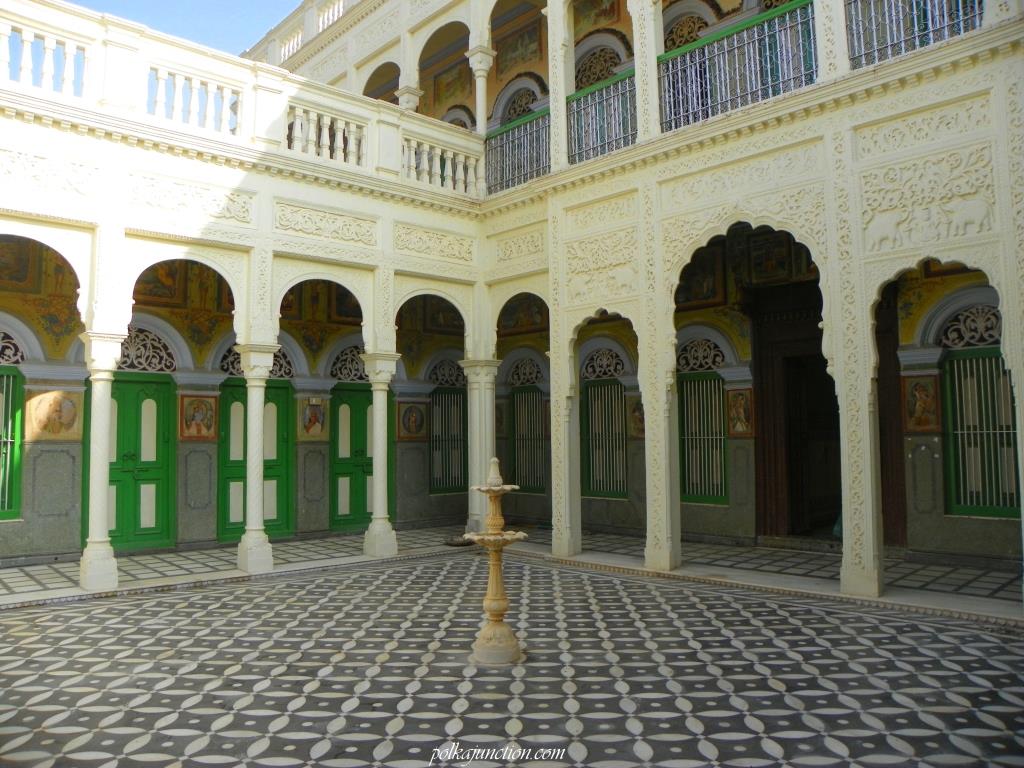 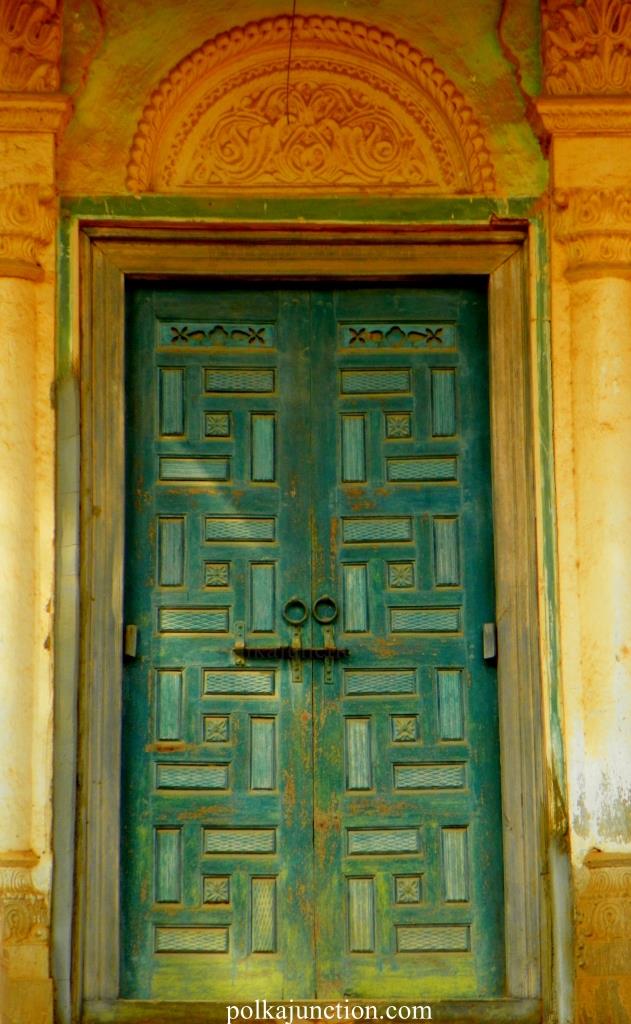 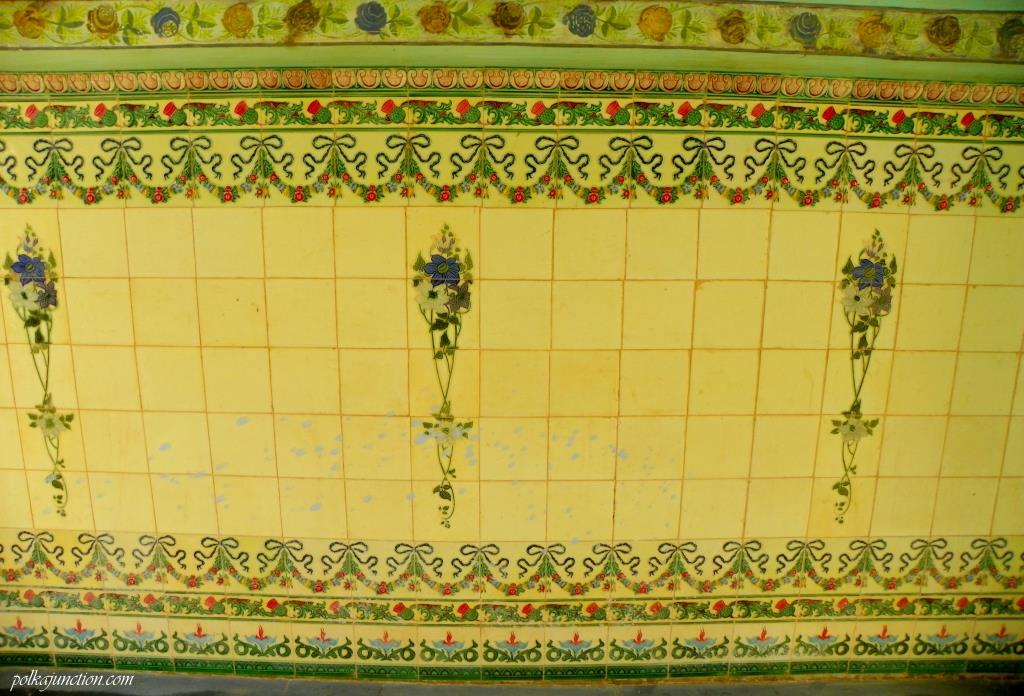 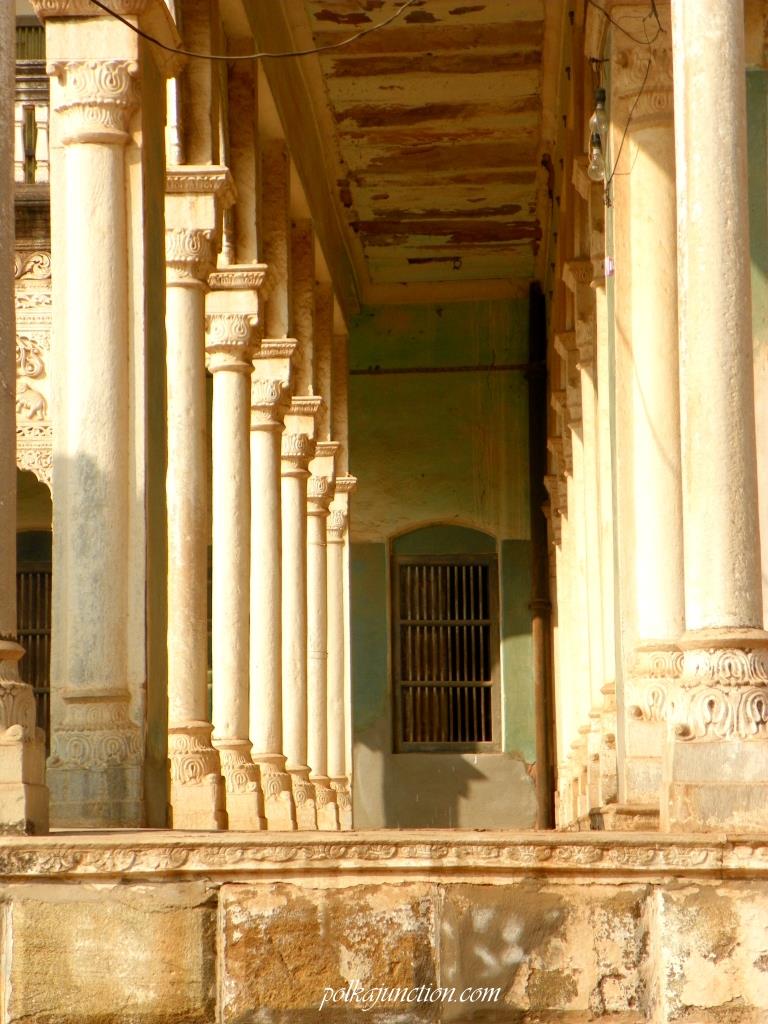 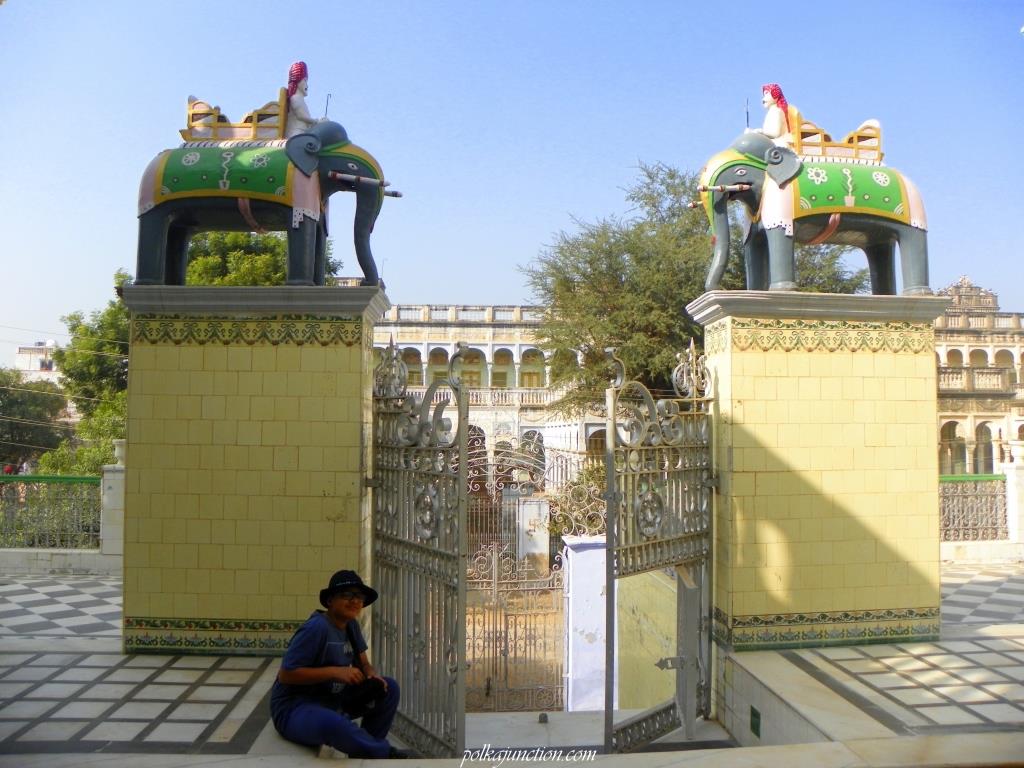 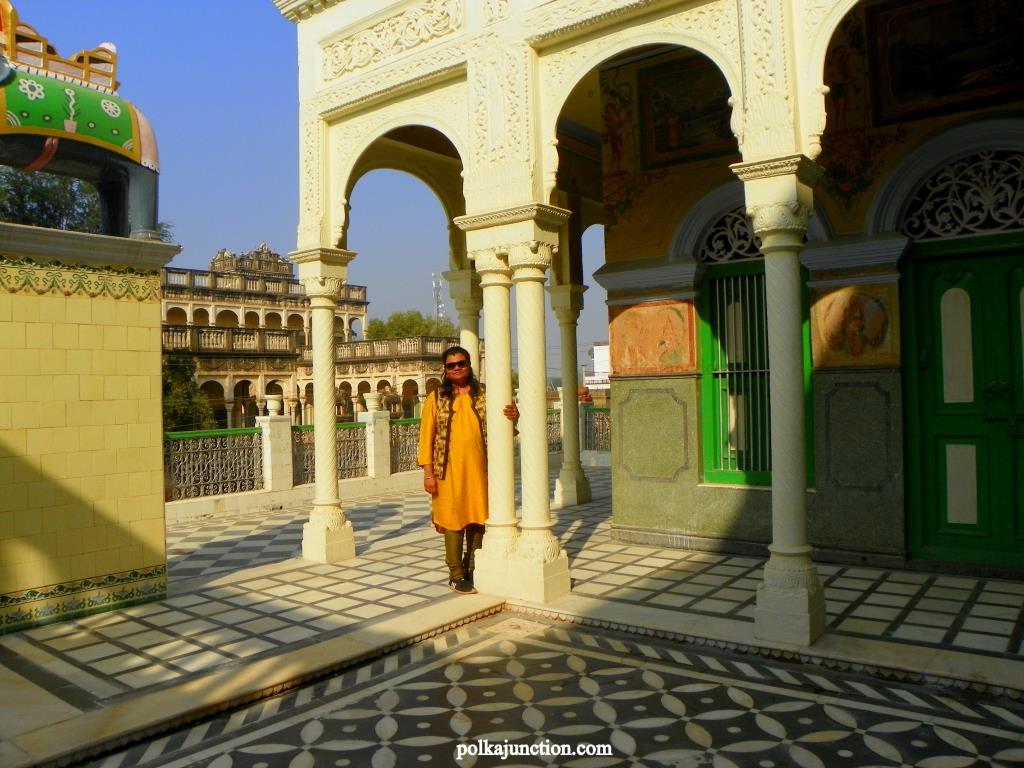 Hope you enjoyed this virtual tour of the havelis at Kajra. Do leave your valuable feedback, comment or queries on this write-up!

Dalhousie – A Colonial Experience In The Primeval Grandeur Of Himachal Pradesh!

Colonial Heritage across the Road!